You are here: Home / Archives for Emily Kinney

Well, The Walking Dead is sure earning the Walking part of its title this time out, isn’t it? Another episode, another small subset of the cast meandering through the forest towards the mysterious TERMINUS and taking the opportunity to do characterisation. This week’s dialogue monkeys: Daryl … END_OF_DOCUMENT_TOKEN_TO_BE_REPLACED 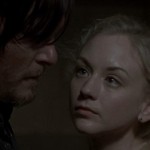 This half-season,The Walking Dead has been favouring small groups of characters filling large expanses of time with comparatively thin storylines. Until now, their least populated effort was the first one with just Rick, Carl and Michonne, but they're going for broke this week, with a two-hander … END_OF_DOCUMENT_TOKEN_TO_BE_REPLACED