You are here: Home / Archives for Fast and Loose 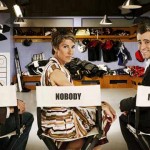 It's not often that the cream of British comedy combines with the genuine American A-list - at least not on TV, our comics do get the odd Hollywood cameo - so to see Green Wing's Stephen Mangan and Tamsin Grieg on screen with Friends' "Joey" in the new BBC sitcom Episodes was always going to be an … END_OF_DOCUMENT_TOKEN_TO_BE_REPLACED