You are here: Home / Archives for Freaks and Geeks

Two conversations with my nephew about three years ago: Me: "Do you do much sport at school?" Him: "NO! Only geeks do sport" Me: "Geeks do sport? Don't the cool kids do sport?" Him: "No, only the geeks. The popular kids play computer games." Another day: Me: "What do you want to do when you're … END_OF_DOCUMENT_TOKEN_TO_BE_REPLACED 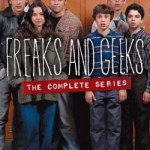 Freaks and Geeks was a high school comedy-drama which you don't want to describe as such, because it has so much more depth than that description suggests. It was produced by Judd Apatow and, since it was so good, VER MAN cancelled it after one season after deciding it had achieved TV … END_OF_DOCUMENT_TOKEN_TO_BE_REPLACED