Taking your bra off at the end of a long day is one of life’s true joys. 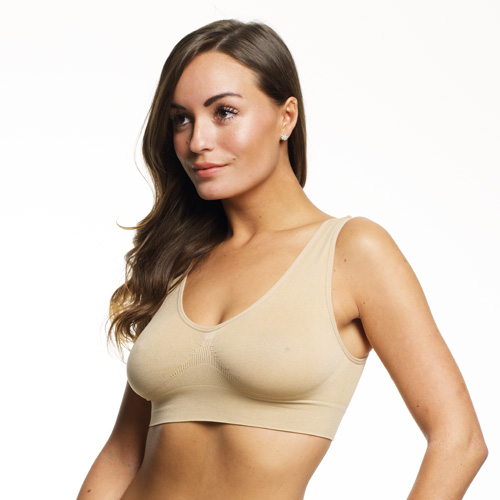 It’s the “sucking my stomach in” face!

If you are lucky enough not to have to wear a bra (for reasons of gender, breast size or whatever) you may get your kicks from taking off an especially snug pair of trousers or underpants and donning elasticated trackie bs or jammies instead.

Whatever, the point is, taking off under garments after a long day is a lovely, precious thing.

But if you’re pregnant or breastfeeding (or just really fed up with wearing under-wired bras) and you actually can’t make it through an entire day without wanting to de-bra, there is another way!

The Belvia Bra from JML (£12.99 for one, £38.97 for a 4-pack) has been tempting me for some time. It promises to make your life wireless without giving you a mono-boob.

When you’re pregnant, with ever-expanding breastages, and your rib cage feels like it’s expanding (because it is), a bra like this soon becomes an object of deep affection.

I un-boxed my Belvia and threw my (unwired but substantial) pregnancy bra to one side with gay abandon. Sliding this on was absolute bliss and I’ve since found myself plucking it out of the laundry basket when it really should be in the wash.

It provides decent support, but it can’t really compete with more architectural under-garments. You buy the size based on your band size. I’m a 30F (at the moment), so I got the small. Annoyingly, I found it too long in the straps to give me as much lift as I’d like; an extra-small would be amazing.

But it gives a nice shape, and I found it was only unsuitable if I needed a prim cleavage in a low-cut dress or similar. I’ve seen a few complaints elsewhere that the Belvia gives no support at all. I’d suggest a lot of those people have bought the wrong size. If you’ve ever been for a professional bra fitting at Bravissimo or Rigby & Peller (rather than one at Marks & Spencer, John Lewis, La Senza and the like), you’ll know that your band size is a lot smaller than most shops tell you.

For breastfeeding, the bra is stretchy enough to pop one milk jug out without any awkward rummaging. For new mothers, its supreme gentleness will be gratefully received during the fun early days of engorgement. Even better, it’s comfy enough to sleep in.

Would I wear it if I wasn’t pregnant or breastfeeding? Only time will tell. But I suspect that once you’ve got used to a bra this comfy, you’ll be unwilling to give it up in a hurry.

*Update* The Belvia range now comes in a selection of pastel colours as well as the usual black, white and skin-colour.