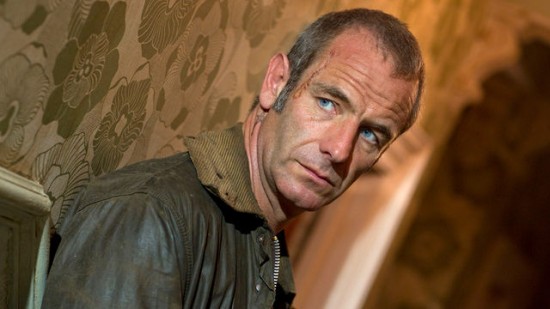 Barging in with the force and velocity of a season finale, Episode 4, The Pack, was one of the most exhilarating Being Human episodes to date, rapidly weaving several plot lines and characters together, before spinning unsentimentally towards a tense and bloody climax.

An episode of this quality raises questions. Namely, why has such an engaging, sharply written drama never made the transition from BBC Three, home of Help! My Dog’s As Fat As Me and Hotter Than My Daughter, to terrestrial TV? And why has the third series been scheduled for Sunday evenings, a territory more closely associated with warm bath dramas like Cranford, Downton Abbey and the late Monarch of the Glen?

Back in the Saddle

After the transient characters of recent episodes, it was reassuring to see the return of two favourites from episode 1: Richard, the carpet selling swinger and McNair the vampire hunter. Richard was enlisted by a terrified Mitchell to protect him from McNair’s merciless vendetta, whilst expectant parents George and Nina sought counsel from McNair as an unlikely expert on the werewolf facts of life.

As McNair, Robson Green‘s quietly menacing performance was outstanding, and his civilised, gentlemanly streak provided an enjoyable contrast to his murderous instincts. After all, what kind of hardened vampire killer shoplifts Bonne Maman jam?

Clearly a man with a past, the only link to McNair’s murky history was Tom, who may or may not have been his biological son, and was the owner of the most anxious eyebrows seen on television. Tom, a walking campaign commercial against home-schooling, was a lost puppy, naïve to the ways of the world, women and fashion, having only ever known what McNair taught him. Yet Tom was happily oblivious, carving Polynesian-style figurines, fantasising about a mythical werewolf ‘pack’ and lusting dreamily after Nina.

Meanwhile, a more requited, though no less complicated partnership was underway between ghost Annie and vampire Mitchell.

Although the pair concluded that, in light of Annie’s spectral presence, their love would have to be more emotional than physical, this was only reached after several coital false starts, during which Mitchell proved unambiguously that he was mean, surly, and sexually polarised between psychotic (nearly killing his surrogate lover) and a complete wet blanket (‘Can we just cuddle a little?’, he gulped at Annie.) I’m beginning to wonder what Annie sees in him.

Episode 4 gripped me right until its nail-biting, violent resolution.

In fact, it was so compelling that I even forgave the scriptwriters their running gag of including cult TV references in each episode. “Will you stop being so bloody Cranford about everything?”, an exasperated Annie fired at the gallant McNair, a joke that is surely first in line to be axed when translated to its American counterpart.

Who knows which TV dramas future episodes will mention? I’m holding out for Monarch of the Glen.