You are here: Home / Featured / In praise of Beautiful People 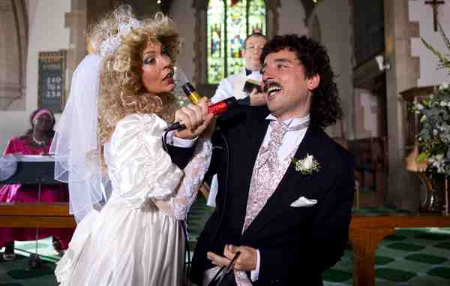 As much as I love telly in all its forms and genres it has to be said that, especially recently, shows have had a tendency to sort of morph into one. Reality TV is the best example of this, of course, with The X-Factor taking its audition rounds into theatres to make it more like Britain’s Got Talent, and Strictly Come Dancing copying the DRAMATIC MUSIC and fast editing of the The X-Factor.

It’s not just reality TV though, and all in all it can leave the committed telly fan with a constant sense of de ja vu…

And that’s precisely why shows like Beautiful People; shows that are that bit different or, in this case I think, unique, completely deserve our praise. Oh, and it’s silly, funny, and totally dorky to boot. Brilliant!

A lot of comedy shows are concerned with being cool and clever, but Beautiful People eschews such considerations and instead goes for colour, campness, terrible puns and outstanding performances.

For the uninitiated, Beautiful People is a sitcom based on Simon Doonan’s autobiography and charts his mid-teenage life, and the lives of his family, best friend Kyle (or Kylie, as he insists on being called) and neighbours. While his friends are into football, he just wants a Posh Spice doll, and he is desperate to escape his (actually rather idyllic) suburban childhood and achieve his place amongst the hallowed ‘beautiful people’.

Simon might be the central character then (and each episode is bookended by an older Simon looking back on his early life in Reading) but the beauty of Beautiful People lies in the fact that it such an fantastic ensemble cast.

As Simon’s mother Debbie, Olivia Colman couldn’t be more different from the cold, dowdy Sophie she plays in Peep Show.  Here she’s as fabulous as her son – big hair, big bust, big mouth and (like most people in the show) big heart. Then there’s Simon’s gangsta sista, song and dance king Kylie, and intellectual plumber dad Andy (he reads Proust before bed while Debbie flicks through a Mills and Boon.)

It goes without saying that all shows are enhanced by the addition of at least one song and dance routine per episode, and you normally get two or three with Beautiful People. In Friday’s episode (which featured Simon and Kylie meeting Dana International in a toilet and was certainly one of the very best so far) we had a bit of Eurovision cheese complete with blue and white flared jump suits, but it’s hard to imagine that this routine – inventive and genuinely brilliant – will ever be bettered…

Dancing in the Street Medley

Beautiful People is on BBC Two, Fridays at 10pm.