You are here: Home / Featured / My Granny used to post things on Tumblr – Doctor Who Kill The Moon review 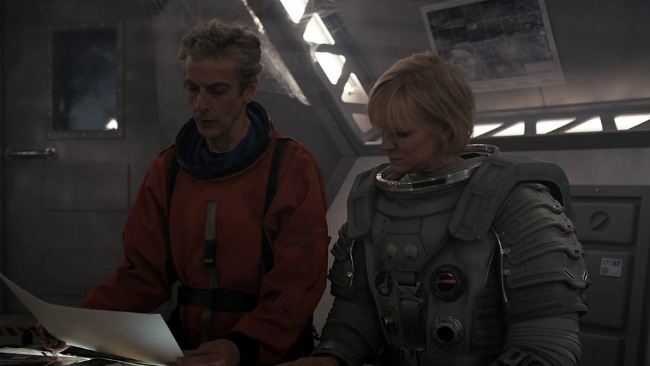 The Doctor gets a thorough dressing down from Clara in an episode that passes all the Bechdel/Mako Mori tests.

First an apology. I totally failed to review last week’s episode. I know that at least five of you will have noticed my missing opinion and for that I apologise. Maybe even six of you. At a push. Sorry about that.

One of my many excuses for not reviewing the last episode is that I actually really disliked it. Not in that fun way where you get to write a scathing review and it’s hilarious just how mean you can be. But in that slightly depressed, “well that took the shine off my day” way.

It wasn’t that it was a bad episode – I know many of you loved it. But it turned into the kind of BBC drama that I just can’t stand. The kind that’s thoroughly shouty, depressing and made for about one third of what HBO spends on the opening credits for its latest bonkbuster.

It was like an episode of Casualty had collided with an episode of Grange Hill with a scene from EastEnders thrown in. My worst TV nightmare. That said, I did enjoy the baddie on the mobility scooter.

Don’t get me wrong, there were bits I did like – the visual gag about the teacher with the bowtie was great, the Doctor failing at being human was fun and the argument about Jane Austen and the Boggans tickled me.

But why all the macho shouting? I mean, if you found out your other half was travelling time and space wouldn’t your first question be “can I come?!” And who in this day and age doesn’t recognise that you can love someone without LOVING them?

Danny Pink, you disappointed me.

So on to happier times. Kill the Moon was straight back up to top notch Doctor Who in my view. I loved the conceit – the Moon is a giant egg! Of course it is! I loved Courtney’s change from stereotypical “youth of today” to a young woman with the weight of the world’s future on her shoulders. And I loved Hermione Norris and her grumpy face.

Has Hermione smiled more than twice in her entire TV career? Someone should do an infographic.

Speaking of infographics, Steven Moffat has clearly paid attention to the accusations of sexism levelled against him. This episode was packed with vulvas. Each woman had her very own story arc and all of them found something other than the Doctor to talk about, namely the future of Planet Earth. There were still more men than women, but two were killed off early, including Duke played by Tony Osoba making his THIRD appearance in Doctor Who.

And just to totally contradict myself, I really loved the shouting in this episode. This wasn’t EastEnders-style free-for-all shouting, this was epic Clara tells it like it is shouting. The Doctor has had it coming for a while, and Jenna Coleman totally nailed it. I was there right with her, cheering (on the inside – I’m not a total nutbar).

For me this episode had everything you want from Who. Action, suspense, actors wrestling with rubber baddies, smoke-filled metal corridors, cobwebs and a countdown timer.

There’s always a but, right?

But are we really meant to believe the Doctor would have left that decision to Clara? Yes, it created a brilliant shout-filled finale, but let’s not forget that the creature in the egg was an innocent alien the same as all the other innocent aliens the Doctor usually protects.

For all we know, it had the intelligence of an entire planet of humans. Anything that’s been gestating for hundreds of millions of years has got to be pretty high up on the list of the universe’s brainiest life forms. Just because it looked like a flying ichthyosaur doesn’t mean it wouldn’t have some marvellous dinner party anecdotes.

Having said that, he was ready to lobotomise the last of the Star Whales, which presumably had an equally colossal brain and intelligence so maybe I’m wrong.

Watch the trailer for next week here. Here’s hoping Frank Skinner’s acting is up to scratch. (Hint: it won’t be)