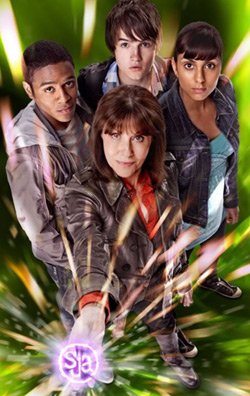 This week’s Sarah Jane Adventures finds our heroes coming their closest yet to becoming miniature version of Doctor Who. They go time-travelling to not one but three separate time periods, looking for Magical Objects and meeting the locals.

Which, you might think, is a lot to squash into two twenty-five minute episodes, and you’d be right. So how did they fit it all in?

This story sees our heroes separated by force, akin to last week’s The Empty Planet, but Sarah Jane is definitely in it this time; it would start to seem suspicious if poor Elisabeth Sladen was sidelined for a second week running. Also, rather than the kids sticking together, they are all flying solo.

And each gets to wander around a separate era, solving the problems of the residents. All of the time periods contain well realised stories, although within the constraints of the budget. So no huge CG landscapes, only a handful of incidental characters for each one.

But the adventures of our heroes and their new friends do feel meaningful, particularly considering how little time they each get. Particular shout-out to Rani and her new royal chums, and it’s impressive that they don’t shy away from having both Rani and Clyde get comments for not being white whilst they’re in the past.

How Did We Get Here Again?

The part of the story that doesn’t work as well, though, is the vague framing sequence, clearly designed to shove the kids quickly into the stories the writer actually wants to do. So they meet a guy in a shop, he declares they must find some Magical Objects for him, then zaps them through a “time window”.

I kept waiting for some sign that he wasn’t all he seemed, or that there was somehow more to it, but no. That never happened. This is children’s programming, I know, and you can’t always expect fine literature. But this particular show usually manages to rise above having such obvious switches and levers sitting around.

Still, I didn’t hate the episodes. I just admit to a small wince whenever the mysterious junk shop owner was on screen. But the other parts worked for me, so fair enough. You can view it on iPlayer and let me know if he annoyed you just as much.

And then join me back here next week for the series four finale! Hopefully they’ve got something good lined up.