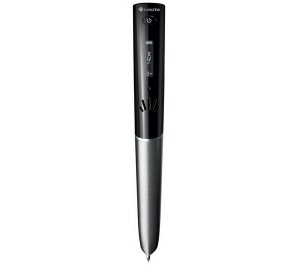 Despite writing copious amounts of notes daily – from meeting minutes and interviews, to shopping lists and to-do lists – I am the world’s worst note taker. I suffer from two problems, either I’m so engrossed in a discussion I write down random bits of conversation that mean nothing to me mere hours after I had the meeting. Or, in my quest to be paper free, I accidentally throw things out that are really, really important. A month ago I accidentally threw out an entire project plan I’d drafted. Not cool.

I knew I needed Livescribe in my life.

The Livescribe Wifi pen is a smartpen that, when used with the special Livescribe Dot paper, converts all your handwritten notes in to digital notes. These are then stored online ‘in the cloud’ so that you can access them any time from any device.

But even better than that it has an inbuilt voice recorder so if you tap on your written notes with the pen later you’ll be able to hear the audio from that moment in time. Likewise, once the notes are synced online you can click on them with your mouse to hear the recorded conversation.

The killer thing with the Livescribe pen is Evernote Integration. This year I promised myself I’d get onboard with the Evernote craze. Until now I was mainly clipping things from the web, or saving the odd email, but add in the Livescribe pen, and all of a sudden Evernote has become the centre of my note taking world.

Highlights and Lowlights of my time with the Livescribe

The best thing about using this digital pen has been the voice recorder more than just digitizing the notes themselves. During the time of the review I was commissioned to write a couple of articles from a two day conference I attended. From my standard seat in the audience I captured surprisingly clear audio of the presenters so I could take less notes and enjoy it while having word perfect quotes to include in the articles.

And clients saw more of my face than the top of my head scratching everything down.

What made me sad about Livescribe was when it ran out of battery. I’m not saying this happened frequently but when it did it effectively renders the product unusable. Like a mobile phone you have to get in to a habit of charging it regularly and checking it’s charged before relying on it too much. I already have too many things in my life that need charging.