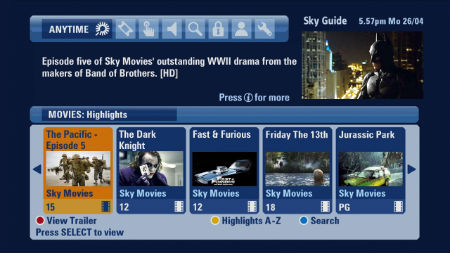 Tomorrow is the launch of Sky’s video-on-demand (VoD) service, which will be rolling its way round all Sky+HD subscribers.

The service is similar to the Anytime service already in place, but instead of programmes being downloaded automatically to your box, you’ll be able to select the ones that take your fancy and download to watch at your leisure.

Sky is promising over 600 “films, popular entertainment and drama ‘box-sets’ (including iconic series from HBO), documentaries, the arts and much more besides”.

It comes at no extra cost and it’ll integrate with your current EPG menu system. Once you’ve selected a show to download, you’ll be able to start watching it before it has fully downloaded (called ‘progressive download’), and Sky promises that content “for most customers” is ready to watch in less than a minute.

This is great news for me personally, because I hardly ever watch anything ‘live’ on TV any more. It’s like I’ve forgotten it’s even an option. Hopefully, the shows on offer will be better than the current selection you get on your weekly Anytime.

Sky Anytime+ will be appearing on Sky+HD boxes from 26th October onwards. The majority of Sky’s HD boxes should have the service by the end of the year, with the the final bunch getting their service early 2011.

Have you got your service? Let us know what your initial thoughts are!