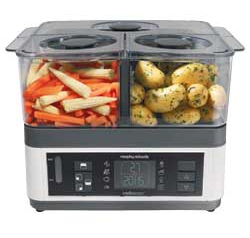 In our house, we’ve got an entire cupboard dedicated to housing the kitchen gadgets we’ve bought, used twice, then packed away. It’s filled with ice cream makers, bread makers and a coffee machine that ended its life when we run out of flavour sachets.

But kitchen gadgets can come in useful, especially if you’re short on time (or skill). For example, this Morphy Richardson IntelliSteam on the right from Argos (£79.99). Dump all your veg into separate compartments, set the timers for each, and leave the steamer to it. Saves you juggling and washing up saucepans. 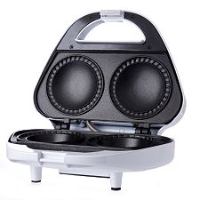 Is there anything more delicious than a hot apple pie and custard? Yes. The smug feeling you get from making an apple pie from scratch. Unfortunately, for me at least, the reality of making a pie is fiddly, long-winded and inevitably leads to a huge flour-based mess in the kitchen.

So this Pie Maker from QVC (£16.38) could save me a fortune in *cough* Greggs *cough*  Looks like a waffle iron, and does pretty much the same thing. I tried it with home made pastry and some apples from the garden, and it was surprisingly good. Also, it’s a great way to use up leftover meat. 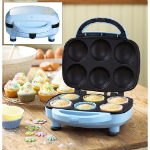 Sold you on the whole food iron concept? Then you’ll either love or hate this Electronic Cupcake Maker from Lakeland (£39.99).

In all honesty, cupcakes are easy to make, and the Electronic Cupcake Maker doesn’t ‘make’ the cupcakes so much as bake them. But you’ll get a better cupcake shape then the ones that expand into one megacake in the oven. 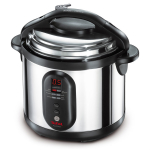 I had a slow cooker at uni in a vague attempt to eat something other than cheese sarnies and pasta. Thing is, slowcookers are only useful if you’re organised and get everything sorted before you head off to work. Plus the idea of leaving a cooker on all day used to freak out my housemates.

There are several cookers around now that claim to give the results of a slowcooker, in the time it takes to catch up on the latest episode of True Blood. I’ve tried the Jamie Oliver Multi Cook (Tefal, £99.99) recently, which can pot roast chicken in 25 minutes. Handy for a lazy Sunday lunch, no?

Food Processor for the multi-tasker 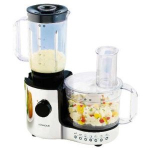 When you’re in the midst of cooking up a big meal, the last thing you want to do is stop to wash up your food processing bowl to whizz up the next step of your recipe.

So this Kenwood FP196 600W Food Processor from Amazon (£40.99) will save you a bit of time, with separate liquidiser and bowl sections.

Any more suggestions for kitchen gadgets under £100 to save you time and space in the kitchen?