You are here: Home / Kids / LEGO does the Royal Wedding

Featuring 180,000 bricks (who counted?), almost 400 LEGO figures and at 2.5m high and over 60kg, this amazing structure was built by only four adults in eight weeks. It’s two and a half meters high and weighs over 60kg. The attention to detail is breathtaking — even the stained glass windows have been replicated using transparent bricks! 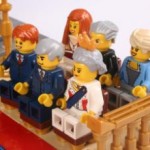 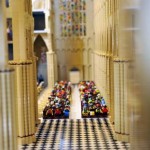 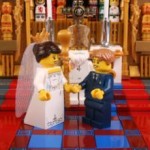 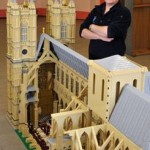 Other than the LEGO William & Kate the constructors used only figures/bricks currently available in stores so there’s no excuse not to have a go at home. The happy couple themselves were created specially for the construction at LEGO HQ in Denmark.

The replica will goes on display today (Thursday 28th April) at the Museum of Science and Industry in Manchester which a great day out in it’s own right and somewhere I loved as a child.

The 28th – 29th April will be dedicated to Europe’s first conference for AFOLS (Adult Fans of LEGO – who knew?) and attendees are encouraged to bring their own constructions to show off. You can take a peek at these yourself when the convention opens to the public from 30th April to the 1st May

Fear not if you’re not up North — the structure will then be going on a Royal Tour across Denmark, Holland and the UK.