You are here: Home / Archives for Klingon 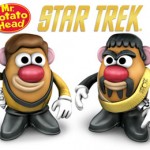 I don't think I've been this excited about the release of a toy in, well, ever. This August sees the release of the Star Trek: The Original Series Mr Potato Heads by PPW Toys, retailing at $30 a set (approximately £19). The first two in the range will be Captain Kirk and his Klingon nemesis Kor, … END_OF_DOCUMENT_TOKEN_TO_BE_REPLACED