You are here: Home / Featured / Quiet: the face of ‘sexism in games’ articles for the next generation

Scantily clad, voluptuous, voiceless sniper lady. Personally, I think it’s a bit much – but who am I to judge? 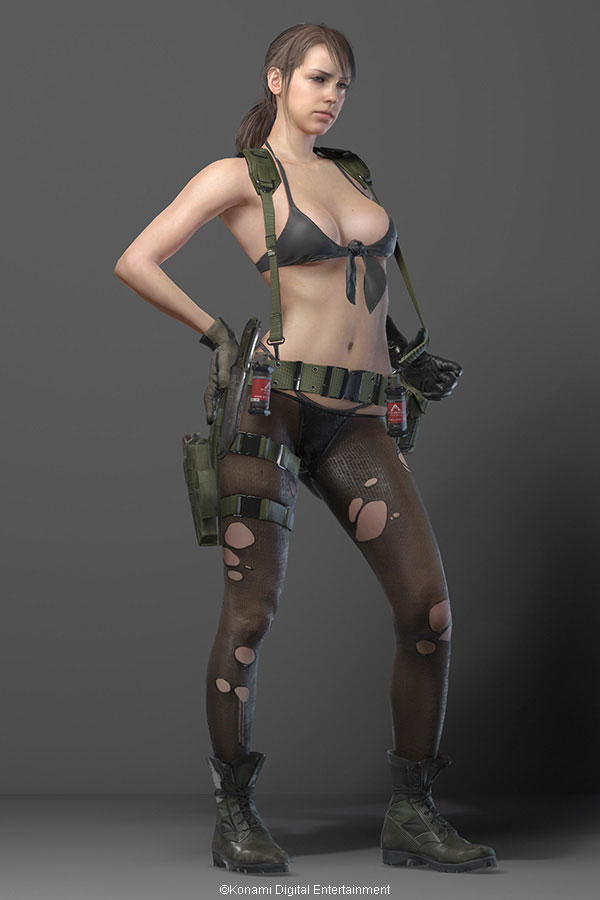 On paper, the idea of a near-naked, fishnet- tighted, curvy lady with a giant gun and no voice looks, well, pretty bad. But does it warrant the sort of media blowout that has reaped havoc online since Kojima’s unveiling of Quiet?

If a woman dressed like this in everyday life she would get shouted at, cat called, approached, heckled – even attacked. But more than that, people, and feminists in particular, would fight for her right to her own body, dress, etc., in the face of what has been termed ‘slut shaming’.

The moment we replace the autonomous real-life lady with a fictitious character however, particularly one designed by men, the situation changes. General reactions take the form of two factions: those who see Quiet as yet another objectification of women at the expense of personality, and others who are basically saying “chill, it’s just a game!” There are of course other schools of thought, but these two take the forefront in the vast majority of comment wars.

The portrayal of equality in creative objects.

My question is, can equality be portrayed in creative objects – games, books, films, etc. – without at least some sacrifice of story and characterisation?

Fiction draws not only on the positive but also the negative aspects of humanity, which means discrimination and objectification as well as anger, avarice, selfishness – war, murder. The list goes on. And fiction can and does definitely include characters who are not paragons of modesty or morality or anything else. More than this, fictional characters can combine the extreme with the mundane without batting an eyelid. The Metal Gear Solid series has some pretty ridiculous (ridiculously awesome) characters in it as well as, sometimes hilarious, sexualisation in it (I’m thinking Raiden’s nudey cartwheels towards the end of Sons of Liberty). Moreover, in the universe of a given series characters can do and wear what they want or what is acceptable within that series – not outside of it, irl.

I’m getting my turtleneck. I’m not defusing a bomb in this!

Now, personally, I do think that the amount of overt sexualisation and, from what I’ve seen of the images and trailers of the new Metal Gear, objectification is a bit unnecessary, even intrusive to my gaming experience. The last time I saw a female character who made me cringe in ridiculousity and say “come now, really?” was around midway through Bayonetta’s ‘first climax’ demo. Without sufficiently silly context or hilarious banter, I don’t think the near-nudity adds anything – certainly not a feeling of fun. And I do think that this sort of characterisation can definitely have a negative impact in the real world; if not in the minds of players who will find the objectification of the design sexually appealing, then in the minds of gamers who will see that others enjoy this and feel themselves inadequate.

Variety and creative license within games.

At the same time, I want there to be variety and creative license within games. I thought something similar upon seeing that PETA was criticizing Assassin’s Creed: Black Flag’s incorporation of whaling into its gameplay; whaling may be horrendous and animal cruelty in general massively abhorrent, but so is assassination – and at least the game is doing something extra to further its aesthetic. If some people are influenced to kick out a boat and go whaling immediately after playing the game then that will be awful and surely we should be doing something to help the people who can so easily be swayed into doing something morally awful. If a person is vulnerable to that sort of influence without any relevant pre-existing interests or tendencies or ideas, then there is something far more serious at stake here and I for one am terrified. (But then, I find it repugnant that whenever I go into my local corner shop a whole bunch of near-naked ladies thrust down at me sexfully from their glossy top-shelf covers, when all I want is to buy some Kinder Eggs.)

At any rate, Kojima has definitely succeeded in gaining a lot of attention and free publicity, good or bad since, hey, there’s only one thing worse than being talked about. I am interested in what Quiet’s reason is for “wearing what she’s wearing”, but I’ll have to wait until one of you lot has played it as I can’t bear the thought of a four-hour horsey ride through an unending , hi-res desert. Windwaker weaned me right off the appeal of that sort of sandbox.

So, is there an easy answer to how character representation and real world development can get along? How do we maintain or up creativity and variety without negatively influencing players and society in general? Is there a quick fix? Do we all just want to play with scantily clad, gorgeous pieces of CGI?

I welcome you to leave a comment below with your ideas – but please, please, please remain courteous to your fellow netlings and don’t let these discussions get ugly.

P.S. There’s at least one positive to Quiet’s get up: I have another super cheap costume to add to my affordable Halloween repertoire.)