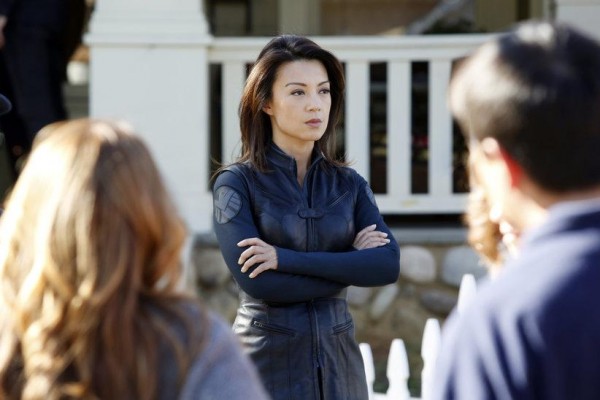 Last week, SHIELD tidied up after a certain Norse God in Greenwich and faced up to an Asgardian berserker staff and a… Norse pagan hate cult. Well, it makes a change form your local Knit ‘n’ Natter, that’s for sure.

This week, we dabble in telekinesis and demons… Spoilers under the jump. Catch up on the action on 4oD.

Warm and Fuzzy get comfortable with each other…

After a rather harrowing pre-credit sequence, in which a seemingly ordinary woman appears to blow up a petrol station with telekinetic powers, we get our answer to last week’s most pressing question: “May and Ward… what’s going on there, then?” (hint: it involves not a lot of clothes).

Warm and Fuzzy (as Skye calls them… your guess as to which one’s which) join the team in collecting our telekinetic troublemaker, StatiCorp safety inspector Hannah Hutchins.

Hannah is blamed for causing an explosion at StatiCorp’s Particle Acceleration Complex, killing several technicians. When Coulson and Co arrive at her doorstep, neighbours and townsfolk alike have formed an angry mob outside her door, with every intention of driving her out of town.

May eventually stuns her with the Night Night Gun, and Hannah gets taken on board The Bus.

Drag her down to Hell… sort of

Although Skye repeatedly asks Coulson if she can speak with her, he chooses to take May to interrogate Hannah. They don’t get a lot out of her, other than the fact that she’s convinced she’s being followed by demons.

Initially choosing to ignore any talk of demons, the team is soon threatened by a mysterious force. And after Simmons discovers that the force is coming from a netherworld, the “demon”, a StatiCorp Particle Acceleration Complex worker named Tobias Ford (whom Skye identified earlier on), manifests himself.

Tobias is soon causing chaos on The Bus, which is forced to make an emergency landing. After chasing Fitz and Simmons, scaring the crap out of the entire team and immobilizing Ward, it’s May who takes control of the situation.

Using Hannah as a lure, May takes her out to a barn (lots of things happen in barns in this show), where Tobias manifests and confesses that he was responsible for the explosion and he’s now being torn between worlds – all because he harboured a crush on Hannah and wanted to see her more often. Tobias eventually lets go of Hannah and disappears to the netherworld.

The B-plot of the week deals with Fitz and Simmons attempting to play a prank on Skye, reasoning that she’s never tasted the delights of a freshman prank in the SHIELD academy. Fitz and Simmons, and later Ward, manage to trick Skye into believing their version of the origin of May’s nickname (“The Cavalry”).

Coulson later tells Skye that, contrary to what she’s been told, it did not involve any guns… or horses for that matter. So, we finally get May’s back story, combined with the much-needed sight of her TAKING CHARGE AND KICKING ASS.

With May finally running on full power, and the rest of the team finding their balance, it seems the show is going the same way as May is. The character of Tobias provides some genuine scares, and the team manages to bond in a more natural way than Fitz and Ward did two weeks ago.

So, where next? Oh, wouldn’t you know, another break in the schedule. Two SHIELD-less weeks this time, which means that if my calculations are right, Coulson and Co return on December 13th. Aren’t we lucky?