You are here: Home / Film + TV / “Are you my Mummy?” Doctor Who, Mummy on the Orient Express Review 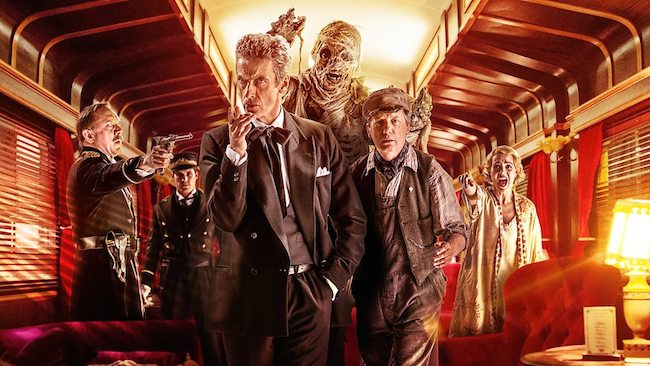 Frank’s got his acting face on

This week Clara and the Doctor are having their goodbye date, so the Doctor has taken Clara to an Art Deco spaceship where there’s a good chance they might both die. Man’s got class.

Mixing up elements of The Mummy, Murder on the Orient Express and Armistice (a low-budget chiller starring Joseph Morgan), this was easily the scariest episode so far. I mean The Foretold was a horror – more terrifying than a lot of big budget movie baddies.

Capaldi was in full on Tom Baker mode, even sounding like him at one point. It seemed like everyone in this one was having a great time. Clara got to do more big eye stuff with plenty of happy-sad smiles that confused her alien companion. Plus, she got to laze on a bed wearing silk pyjamas. Nice.

Ah, Frank. You’re never going to be the world’s greatest actor, but you were clearly so delighted to be on board that when the Doctor invited you to stay I thought you were going to throw the script out into space and launch into one of your ill-advised musical numbers.

Listening to him earlier on his Absolute radio show he’d said his pants were full “front and back” from the worry. Man’s got class.

There are always lots of little things thrown in for the fans – the Tom Baker references, “are you my mummy” etc – but it’s starting to feel like those of us in the Emma Watson Fan Club are also getting a few winks.

In the main scene between Clara and Maisie (Daisy Beaumont), Clara asks if they don’t have something better to talk about than some man. Obviously, they then continue to talk about him, but at least they made a nod to anyone watching with a Bechdel checklist.

At least he’s more interesting than Danny, who’s fast becoming a bit pointless. Let’s hope he gets to actually do something or Clara’s just going to continue her affair with the other man. And who could blame her.

This whole episode felt tightly plotted with an ending that was truly satisfying. And the epilogue gave Clara a chance to pretend to herself and everyone else that she’s not just an addict, that the Doctor is a Good Man and that Danny thinks her secret second life is a great idea.

I think we might be heading for a fall…

If you liked this, you can read my last review here. (or check out the Doctor Who tag for all our Whovian guff.)