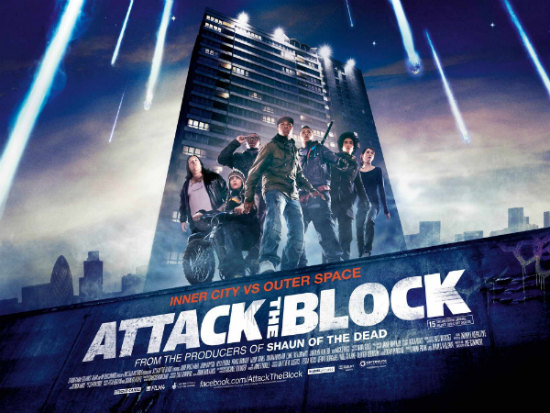 Is Attack the Block any good? Why, yes it is, says Anna Waits…

Like any fan of the Saturday morning-brightening Adam and Joe, I’ve been looking forward to old Cornballs’ first directorial outing Attack The Block for some time now, though I would have dug the premise — a gang of South London kids defend Earth from an alien invasion — even without Joe Cornish’s involvement.

Being directed and written by someone so well-liked, and coupled with the promotion (which has been pretty relentless over the last couple of weeks), Attack The Block has had a hell of a lot of attention. Mostly it’s been very positive, but in a few isolated-but-notable exceptions, it’s been rather less glowing.

Being a proper student of film, you’d imagine that the most notable exception for Cornish is Mark Kermode, who blogged an ‘immediate reaction’ review to ATB a few weeks ago and essentially summed it up with “well, it’s not Shaun of the Dead.”

This was no doubt a big disappointment for Joe, but it did give rise to some of the best radio I’ve heard in a long time when he appeared on Kermode and Mayo’s Film Review and called DrK out on his review. They both clearly respected each other but didn’t want to back down, it was prickly, awkward, intelligent, respectful… an amazing listen, really, so I encourage you to iPlayer it if you missed it.

But what about the film?

So to the film! Well, I thoroughly enjoyed it. What’s particularly impressive is that, in a film by a first-time director and plenty of just-about first-time actors, it it absolutely the direction and performances which are its best elements.

This may not be a deep or intellectual response to the film, but it just looks insanely cool throughout — the council block being attacked from all sides by creatures from another planet is lit and shot like some monolithic space station, with the interiors all stark and other-worldly and the walkways used for hugely exciting chase scenes. As much as I enjoyed watching ATB, I also enjoyed just looking at it.

As for the young actors playing the bunch of hoodies who turn their attentions from car jackings and playing FIFA to the more pressing issue of alien invasion, they are all superb.

The film opens with them mugging a young nurse on her way home, and they deal with the transition from unlikeable to heroes with subtlety and aplomb; particularly John Boyega as central character Moses and Alex Esmail as his hugely loyal right-hand man, Pest.

In front of our eyes they transform from a gang with all its negative connotations to a gang in the most positive, Scooby-Doo-slash-Goonies sense, but without their previous crimes ever being forgotten. They are fun, fascinating and believable.

There are, I think, a couple of mis-steps. The middle-class white kid (played by Luke Treadaway) who’s trying ingratiate himself with the cooler kids from the block is probably too broadly drawn, and while the gore level is pitched just right, it could do with being jumpier. But these issues barely detract from the enjoyment of a film which pushes all the sci-fi geek buttons that you need it to (starting with a starry sky and panning down, anyone?). The film has characters you care about and it’s just freaking stunning to look at.