You are here: Home / Film + TV / Castle and Breaking Bad: TV made by geeks, for geeks 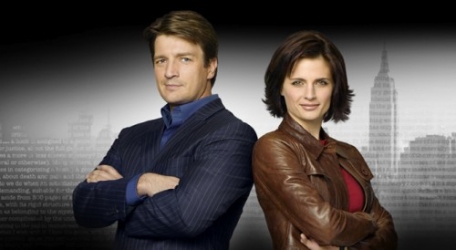 Last week, I watched possibly the geekiest ten minutes of television ever. In the Hallowe’en episode of Castle, Nathan Fillion’s breezy detective series, Fillion spent the first act dressed as his much-missed Firefly/Serenity character, Mal Reynolds. “Didn’t you wear that five years ago?” his character’s daughter asked. “What? I like it!”, he replied.

He then proceeded to mention Buffy (in which he also appeared) and used the word “internets”. Cue massive amount of high-pitched “OMGs!” from people. Well, from me. God, I’m a loser.

There are lots of types of TV that are clearly made by geeks, for geeks. Castle, in which Fillion’s narcissistic mystery writer follows around a hot female homicide detective (the awesome Stana Katic) trying to a) get inspiration for novels and b) flirt with her, is the kind that’s just really, really fun. It delights in shameless meta-textual references, trips along on the considerable charm and chemistry of its two lead actors and kills an hour pretty much perfectly.

Breaking Bad, on the other hand, isn’t fun at all. Being fun, at least the way Castle does it, is easy. Being truly great, which Breaking Bad undoubtedly is, is hard.

It is still very geeky, though. It loves science so much that the lettering for its credits is done like the periodic table. But it’s really about what happens if you take a science nerd and make him live in a gritty crime drama. 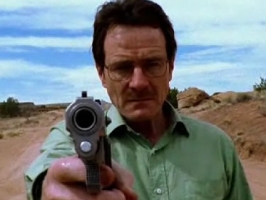 Walter White (Bryan Cranston), a high-school chemistry teacher with a pregnant wife and a disabled son, discovers he’s dying from lung cancer. Desperate to get enough cash together to provide for his family when he’s gone, he decides to use his mad chemistry skills to start cooking and dealing meth.

Cranston is unrecognisable from when he played the spineless, manic dad in Malcolm in the Middle. He gets progressively more gaunt and dead-eyed as the series goes on, both as the cancer takes its toll and his choices start eroding his upright, family man persona.

The best thing about it (and another sign it’s made by geeks) is that it attacks its subject matter so methodically. It stays with Cranston through every excruciating step of his journey into moral hell. In a lot of TV, when the lead character needs to dispose of some bodies, it’s done off-camera and next scene the plot continues. In Breaking Bad, something seemingly simple like that can take up three episodes. Nothing’s easy, whether it’s getting the right ingredients for the meth, setting up distribution networks or taking care of rival dealers.

And every tiny decision takes Cranston from a moral man to an amoral one to… by the end of the second series, it’s not really clear what he is any more or what his real goals are. It’s a stunning, terrifying performance, facilitated by a meticulous, merciless plot.