You are here: Home / Featured / Doctor Who: Vincent and the Doctor review 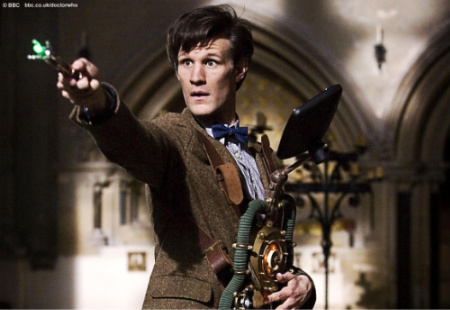 As you’ve doubtless heard, this is The Richard Curtis Episode. The jokes about floppy fringes and stuttering write themselves, don’t they? But it would be a lot easier to hurl such abuse if the end result had been rubbish, and annoyingly it isn’t.

Despite widespread grumbling about his last few movies, I always felt Curtis was a good fit for Doctor Who. Since its revival, the show has become keen on the big, sweeping emotional moments, and Curtis has engineered many of those in the field of romantic comedy.

Cleverly, the story he’s gone for here is the Doctor befriending a dead historical figure. It reminds me of Steven Moffat’s The Girl In The Fireplace from series two, actually, right down to the sad ending. Except instead of the Doctor romancing a French aristo, Vincent Van Gogh turns up and flirts with Amy Pond.

The great man is played by Tony Curran, and I thought he was pretty fantastic actually. As the title of the episode gives away, the point of the episode is Van Gogh’s interactions with our heroes, and it would’ve fallen a bit flat if he’d not had a spark in him. But Curran brings a lot to it, I think, including the parts addressing his mental illness.

Although not always front and centre, that aspect rarely goes away. His behaviour, the way the locals describe him, and even the invisible monster that only he can see; it’s both an admirable portrayal and doesn’t overpower the episode. As I keep saying, impressive.

To stop this turning into a gush, I guess I could mention that the alien doesn’t have that big a role, really, and that much of the plot is fairly predictable. But that’s probably as the author intended, to be honest.

Yes, if every episode was like this I would start to pine for a greater sense of urgency, but they did keep the ongoing plots ticking over with a few mentions of poor Rory. (Gone, but not forgotten. Well, mostly forgotten actually.)

If pushed, I’ll admit I could have done without the mournful soft-rock number over the climactic sequence. But it’s still a lovely episode, beautifully directed, and the sense of freshness and newness that I missed during the rather average Silurian two-parter is back. I can’t believe there’s only three weeks left, though.

And if you thought The Richard Curtis Episode had a wedge of preconceived hate to overcome, next week is The James Corden Episode…