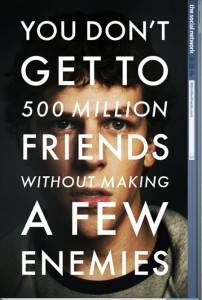 If you haven’t seen it already, the latest teaser trailer for the Facebook movie, The Social Network, is now online.

If you use a Lost Boys-style cover of Creep by Radiohead and you flash up some dramatic looking scenes, I’m always going to be impressed. But despite that, it’s got plenty of potential to be a great film — murder, intrigue and geekery. OK, maybe not murder, but plenty of geekery.

The film is out in October in the US. It’s directed by David Fincher of Zodiac, Se7en and The Curios Case of Benjamin Button fame, with Jesse Eisenberg from Zombieland as Mark Zuckerberg. Surely a perfect piece of casting?

Check out the trailer overleaf.