You are here: Home / Film + TV / Game of Thrones S2 E8: The Prince of Winterfell review 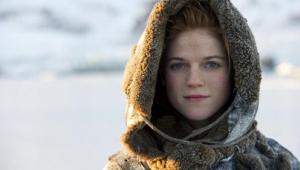 This week’s episode was brought to you by the C word.

It was a funny old episode this week. In parts it was very slow-moving, feeling more like it was lining up the characters for the final act rather than telling a story. But in other ways it was thrilling, especially scenes involving Tyrion or Arya.

Ros the prostitute has become the official GoT tart-with-a-heart, so it was no shock at all when she came through the door instead of Shae. Tyrion’s subsequent declaration of affection for Shae left me squirming – I still don’t trust her and I will now fret that Tyrion is heading for heartbreak.

This week was all about siblings loving or hating each other. Yara’s scene with Theon where she tried to convince her blockhead of a brother to come home with her was touching – although I can well imagine what a fractious child he was (and it still doesn’t explain why she let him grope her lady garden the other week).

Grumpy King Stannis gave a great speech (including some alarming news about the fate of the dogs on Storm’s End), confessing that he was hurt when he was treated badly by Robert all those years ago. And Arya got stirred into action at the news that Lord Tywin was on his way to spring a trap on her brother

The number of female actors who haven’t got their waps out for the camera continues to diminish. Talisa, the grubby field medic, stripped down after a touching tale of her brother’s demise (and subsequent recovery). Robb looked like he was in need of a little stress relief, so I can’t really begrudge him – even if I did spend the whole time saying “but anyone could walk in, shouldn’t they at least find another curtain to go behind?”

Arya’s escape with Joe Dempsie and the other one was brilliant. I love assassin Jaqen H’ghar’s little speeches about “a girl” and “a man” – although I wonder how he gets through an entire day talking like that “a man needs to pop out for some more bread; a man needs you to pass him a loo roll under the door; a girl needs to get out the way of that hay cart”.

What else? Could Jon Snow’s plotline turn into the plot from Homeland, with Jon returning as a turned man? Will Dany ever stop talking and just get herself into the House of the Undying? Will Jaime and Brienne get their own spin-off series where they argue around different scenery in Westeros? What happens when the Bran and the gang need to do a poo?

All this to come and more!