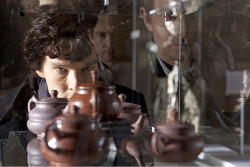 By now, you’ll hopefully have read what our resident film and TV expert Nick had to say on the opening episode of Sherlock, and developed your own opinion on the modern adaptation. But how did Doctor Who power duo Steven Moffat and Mark Gatiss feel about tackling the much-loved stories?

Gatiss recently spoke on the BBC blog regarding the new series, where he revealed that the partners in crime had decided to set the series in the current day, as they feared the story had become “all about the trappings and not the characters”

He commented that “Sherlock Holmes may be the most filmed character in all fiction but to reinvent him for a new audience – as well as fans – is not just thrilling and exciting, it’s an honour.”

The books were first published in 1887, and Gatiss believes that the strength of the characters allows them an immortal trait that enables them to be recreated over and over again, regardless of the time period the story is set in.

The advancements of investigative methods have provided a challenge for the producers, particularly as these were the weapons Sherlock used to boast in previous versions. However, the pair believe Sherlock still stays a step ahead of the police by being “the best and wisest man there is”

What do you think about the modern setting? Do you think Moffat and Gatiss made the right choice?