You are here: Home / Featured / Sherlock – A Study In Pink: Dork Review 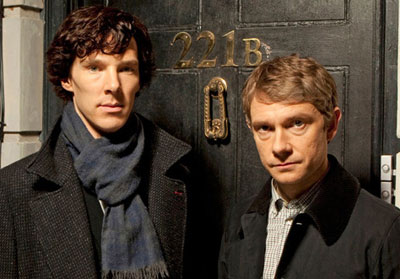 After a long wait, Sherlock bounds onto BBC1 to solve mysteries and seem quirky. Although devoid of aliens or goblins, it has attracted the geek eye due largely to co-creators Steven Moffat and Mark Gatiss, both writers on the all-conquering Doctor Who.

The first episode, written by Moffat, has to introduce the modern day Holmes and Watson, then give them a case to show off with. Fortunately, it has a ninety minute slot, or this could have felt rather rushed. Pilot episodes are tricky beasts.

From Doctor Who to Jekyll, even in Coupling, Moffat has structured stories to keep the audience guessing, withholding key information until the moment of greatest impact. So a detective story feels like a natural fit for him. This isn’t the most fiendish mystery, but a good introduction.

Our new Holmes is Benedict Cumberbatch, owner of the best name in acting. He looks younger than I imagine Holmes to be, but has thoughtful twitchiness off to a fine art. I also felt he resembled a baby-faced version of Matt Smith’s Doctor Who, but perhaps I had Who on the brain due to Moffat’s involvement.

There are a lot of visual flourishes, including text messages leaping up from mobile phones and scene transitions happening gradually across the screen. It gave it a strange comic book aesthetic, which looks cool to me right now. Whether it will age well, I do not know.

Holmes no longer a one-of-a-kind genius?

Of course, Moffat and chums are not the only ones homaging Conan Doyle in popular culture. There’s the Robert Downey Jr film franchise doing another cover version, not to mention House, featuring Hugh Laurie as the medical equivalent of Holmes.

Despite transplanting the action into 2010, Sherlock feels like the most traditional retelling, allowing Holmes to be a detective rather than action hero or angst-ridden drug addict. (Although the latter does get a moment.)

But all this referencing means the premise feels familiar. Since I’ve watched the afore-mentioned movie and over a hundred episodes of House, the combination of borderline-autistic deductive genius and exasperated yet affectionate companion doesn’t exactly seem fresh. Even the current Doctor Who isn’t a million miles from the Holmesian formula.

This isn’t really the fault of Sherlock, of course, and I’ll still be watching gleefully, because it’s a good, fun, well-made piece of television. But I personally would be  more blown away by it if not for those pesky other imitators.