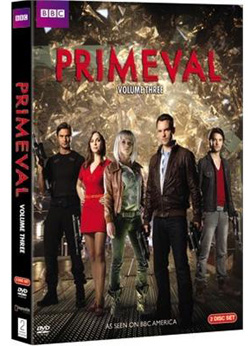 Last year, knockabout dinosaur drama Primeval aired its fourth and fifth series, aired on ITV and Watch in the UK, and BBC America in the US. The last of these episodes comes out in DVD today in the UK, and the whole thirteen episodes were issued in the US as “Volume 3” earlier this month. And fair enough, as they were one big story.

We’ve been sent a copy of the US boxset to review, so it seems a good chance to look back on the evolution of the run, not to mention the special features available.

You can read my reviews of all thirteen episodes on this site at your leisure. But as a reminder, this is the series that introduced a range of new characters, including the excellent Ciaran McMenamin as Matt, and pitted them against the slow commercialisation of the ARC.

Looking back, I grew to enjoy it by second half (or “series five” if you like), due to more focus on the main plot. In the early stand-alone episodes, Primeval is rather prone to trailing off with “and then they ran in and shot the dinosaurs THE END”.

Which is fine if you’re a kid, but lacks drama compared to the wrenching character decisions of Doctor Who or Merlin. Still, it has likable characters, especially Ben Miller as the world-weary boss, who almost makes the series single-handedly.

The prime bonus is “New Dawn: Making The New Primeval”, a two-part documentary taking us behind the scenes, including discussion of the reasonings behind some of the changes made in the new series.

Oh, and it’s split into two halves, the second of which covers “series five”. Those of you who have the all-in-one US boxset and are particularly spoiler-conscious, watch the first seven episodes before the second half of the documentary.

The US set also gets the cool extra of an original prequel to series four setting up the new cast. It doesn’t seem to be on the UK version, but jealous English fans can see them on the ITV website.

In short, I can’t say the extras exactly justify the cost of the DVDs on their own, but the prequel episode especially is a nice touch. If you love the show and want to own it on blu-ray or DVD, this is a fine addition to your collection.