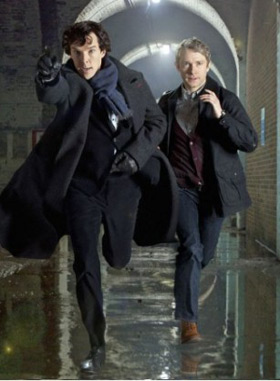 After the first episode of Sherlock, audience reaction was hysterical. Twitter had an orgasm and reviewers spilled so much praise onto their keyboards that they exploded in a shower of plastic. (Seriously, I’ve only just picked the S key out of my hair.)

So perhaps it was inevitable that when the second instalment aired, it would seem a bit of a let-down. Certainly, the absence of Steven Moffat’s name from the writing credits made me ready myself for a degree of disappointment.

Still, the feeling of deflation when the credits came was heavier than expected. The first episode had a certain something, and this one… just didn’t.

Not a complex plot

It’s an awful phrase that has infiltrated the internet reviewing lexicon, but I did find myself thinking “filler episode” whilst watching this. Sub-plots barely advanced and many major-seeming characters from last week were entirely absent.

I accept that some episodes are less important than others, but in a series of only three episodes, it’s more damning to write off one of them as inconsequential. Of course, not advancing the arc plots doesn’t make it rubbish by default, but the actual mystery was rather un-engaging too.

I found myself more interested in Watson’s dating attempts, which says good things about Martin Freeman’s endearing acting but worse things about the rest of it. Slowness was also a problem, there didn’t seem enough plot to fill a ninety minute slot.

Got a bad feeling about this

But more than the story itself, the feel of the show wasn’t as interesting as last week. It often felt like a generic BBC crime drama, with only the Holmes/Watson banter as a reminder of the source material. Cumberbatch and Freeman were still great, but some of the quirkier touches like Mycroft Holmes were noticeably absent.

And Holmes didn’t seem like enough of a genius. Maybe I’m over-expecting of the poor chap, but many of his brilliant realisations this week felt like nothing Dalziel and Pascoe couldn’t have come up with, once they’d had their liquid breakfast. He also developed a penchant for hand-to-hand combat, which came rather out of nowhere.

As I say, expectations were perhaps unreasonably high after a brilliant premiere. Hopefully next week Mycroft and Moriarty will be gloriously brought to the forefront and I will write some glowing praise. But for now, I must admit, that was competent but lacked the brilliance of the first one.

What did you think?
More Sherlock on Dork Adore