You are here: Home / Film + TV / The Dark Knight Rises: What are you looking forward to?

Unless you’ve been living in a (bat)cave for most of 2012, you’ll know that the third and final instalment of Christopher Nolan’s Batman arrives in cinemas today *SQUEAL* 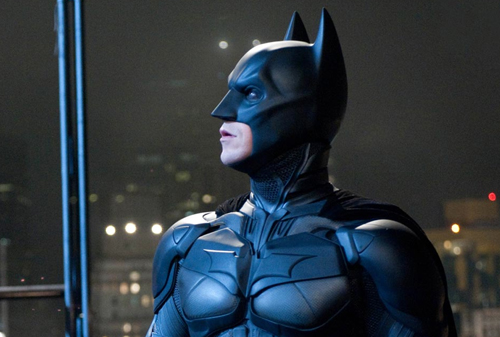 I’ve no doubt that the majority of geeks reading this will have already seen the trailers, watched the première footage, read the reviews, and watched Batman Begins and The Dark Knight back-to-back in preparation, but what can we expect from The Dark Knight Rises, and will it live up to the gigantic hype?

Obviously we’re all hoping it will, but following a movie overshadowed by the death of the brilliant Heath Ledger can’t be easy…

Personally, I’m a big Batman fan, but I also happen to be a rather opinionated girl, which some Batmen find a little, well, intimidating. However, following the death threats made to critics on RottenTomatoes.com who called the film ‘nonsensical’, ‘a let down’ and ‘thunderously clunky’, I figured I’d save myself from flagellation and draw up a list of elements I’m most looking forward to.

Are any of them of them on yours?

Hans Zimmer is one of my favourite composers; I have complete faith that he will set the right tone for The Dark Knight Rises just as he did for Batman Begins and The Dark Knight. Although it’s nice to hear that Hans and Nolan have built up quite a rapport having worked on the Bat trilogy and Inception, I was disappointed to learn that James Newton Howard didn’t return to assist with the writing of the score because he felt he would be “a third wheel”. Poor guy…

As well as all the super-cool spandex, there is a serious amount of designer garb in The Dark Knight Rises.

Giorgio Armani has teamed up with costume designer Lindy Hemming once more to create an array of stylish pieces for Bruce Wayne, Commissioner Gordon and Robin John Blake. The Italian designer has even supplied accessories for Selina Kyle aka Catwoman, AND sewn customised labels into Christian Bale’s suits which read “Giorgio Armani for Bruce Wayne”. Amazing.

Tom Hardy, Marion Cotillard, Anne Hathaway and Joseph Gordon-Levitt have joined the Batman family, making an already stellar cast an almighty force to be reckoned with. I can’t wait to see what some of Hollywood’s biggest and brightest stars will bring to the franchise; Tom Hardy’s portrayal of Bane has got me particularly excited!

Amy is self-confessed soundtrack geek who loves Buffy, Doctor Who, Spaced, and any video game that involves killing zombies with a shotgun. She contributes to a number of fashion & celebrity sites in order to buy excessive amounts of offbeat movies and Japanese food; she's also addicted to stationery.