You are here: Home / Featured / Doctor Who Adventure Games: City Of The Daleks review 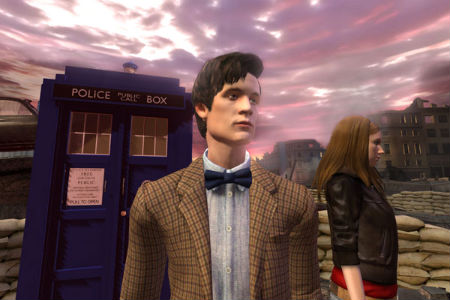 As if a whole new series of Doctor Who wasn’t enough value for your licence fee, the Beeb is also ladling out free video games this year. You can download the first ‘episode’ from the BBC Doctor Who site now, and three more will follow.

It seems a bit churlish to launch into a detailed critique of a fully developed video game that’s being given out for free. But I do the same for the Doc’s TV episodes every week under the same payment plan, so I think I can give the gift horse a few whacks to the teeth.

My first impression is they deserve a lot of a credit for presentation. The graphics are decent, not exactly photo-realistic, but quite slick. Obviously, we get the actual Matt Smith and Karen Gillan doing the voices of the Doctor and Amy, which does a lot to suck you in. There’s some good banter in the script, and the inclusion of opening and closing credits is a nice touch.

In short, this definitely doesn’t seem like it’s been banged out on the cheap, which is half the battle with tie-in products. This first episode features a lot of stealthy sneaking to avoid Daleks, which is inevitable when your hero is a damn hippy pacifist. It’s like being Solid Snake, without the ability to slit their throats from behind. Not that you could really do that to a Dalek.

A bit of variety would’ve been nice, rather than constant crouching. I did enjoy the mini-games to achieve certain tasks though, and some of the later puzzles were hard enough to give me a sense of achievement upon completion. I don’t know whether that makes the game good or me an enormous man-child.

The controls gave me some trouble, I admit. I died many times because I was unable to make my character move in the desired direction quickly enough. I’m not sure what the solution is, but repeatedly becoming trapped against the scenery quickly wears thin.

Nonetheless, as a bonus for kids and so forth, this is actually quite good. It’s not going to take an adult player long to finish, especially a seasoned gamer, but it looks, sounds and feels the part. Hopefully a wider variety of stuff to do will emerge in later episodes.

Play Doctor Who City of the Daleks