You are here: Home / Featured / The Fourth Doctor’s scarf and more Tom Baker Doctor Who memorabilia

With the new series of Doctor Who airing at the moment  on the BBC many of us have been going back and watching old episodes of the show too!

One Doctor that stands out as a firm favourite among many of us, myself included is Tom Baker, the Fourth Doctor Who.

The BBC Shop, knowing how much we love Tom Baker as The Doctor have a few items of memorabilia that are currently up for pre-order. 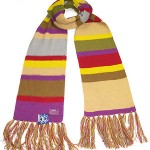 This iconic Doctor Who scarf is made to the same pattern as the original scarf worn by Tom Baker in season 12 of the show and is a lengthy 12 feet long.

Bit expensive for an acrylic scarf – and we’re not sure the colours look quite right! You could always knit your own using an archived official BBC Tom Baker scarf knitting pattern.

Rather than stealing the Fourth Doctor’s style, this T-Shirt has a classic print of Tom Baker on it wearing his trademark scarf and hat. 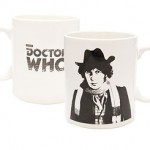 If you need a cup of tea to wash down those Jelly Babies there is now this mug with a classic image of The Fourth Doctor on it.

It will be released on the First of October and can be pre-ordered now at £7.99

If you just cannot wait to get your hands on these great new products then why not take a look at some of these Tom Baker Doctor Who items that are available right now to buy from the BBC Shop?

This great Doctor Who wallet features a colourful print inside of  a TARDIS, K-9, a Dalek, Tom Baker and a Cyberman.

“Would you like a Jelly Baby?” This Tom Baker T-Shirt features the Fourth Doctor offering his favourite sweeties. It would be rude to turn him down!

This keyring features the Fourth Doctor with his iconic 12 foot scarf!

Who do you think made the best Doctor Who? You don’t have to agree with me!

Share with us in the comments who you think made the most iconic Time Lord and why?