You are here: Home / Life Dorkage / Want to swim better? Total Immersion could be the answer 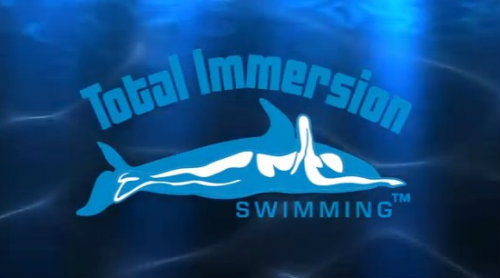 Swimming is the only sport where your limbic system – your primitive brain – is constantly telling you that you will die.

It’s early one Sunday morning in Old Windsor and I’m listening to my Total Immersion (TI) swimming coach explain to me why so many of us find swimming hard. Namely that we are humans, we are designed to walk and breathe on land, and getting in to the water kicks off a deeply ingrained human instinct that shouts “You are going to die! Get your head out of the water you fool!”

Survival swimming – like the stuff you did at school; learning to swim a certain distance, jumping in to the pool with all your clothes on and, er, trying to take your t-shirt off in the water without drowning– is about the most we are ever taught as children.

But is it possible to learn more? Can we over-ride our caveman panic and be more fish-like; to float, to breathe calmly; to slip through the water smoothly and quietly (yes that’s right, swimming shouldn’t sound loud and splashy); and generally swim for the pleasure of it?

This is where Total Immersion comes in.

What is Total Immersion Swimming?

This viral video of TI coach Shinji Takeuchi, now with over 4 million views on YouTube, is what TI swimming looks like in practice. Cool ain’t it? But Total Immersion, founded by Terry Laughlin, is more than just a stroke technique, it is a complete coaching solution to get anyone – from beginners to triathletes- swimming with a “fluent, efficient and fast stroke technique”.

I’d bought the book, but as a weak swimmer supremely lacking in confidence I couldn’t quite put the techniques in to practice – certainly not in my local pool where actual people might see me.

So I decided to put myself through the one day bootcamp experience with Total Immersion UK.

I’m not going to lie to you, turning up that Sunday morning and discovering that 90% of my classmates were triathletes attending the course to shave minutes off of their race time rather than to, you know, learn not to swim like an injured hippo, was intimidating.

But when I stammered like cookie monster during the introductions, “Me like water, me want swim pool” my coaches seemed unfazed ‘Sure, you’ll get that out of today. No problem.’

This was followed up by them showing video of a guy TI devotees around the world have named Rubber Man. I assure you that no matter how badly you swim you will never look as freaky as this former course attendee who has given permission for his before and after video to be used to inspire anyone to give TI coaching a go. (That’s right, they video you at the start and end of the course. More on that later.)

After an initial class session you hit the pool for a two hour coaching session. We were 15 people with three coaches, so broke down in to groups of five for as much one-on-one coaching as possible. This worked great and the Total Immersion bootcamps are deliberately kept small for this reason. (And yes, that’s why it costs a bit before you start balking at the price.)

You learn the basic drills you’ll need to practice on an ongoing basis to unlearn your current bad habits and start to build up a muscle memory of Total Immersion technique. It’s hard for me to explain but it’s all about finding your balance in the water, using your core to propel yourself through the water instead of spinning your arms like a windmill, and learning to manage your breath with your head submerged in the water and that pesky brain running the YOU WILL DIE caveman programme.

At the start of the first pool session they video you. For many people being videoed out of the water is bad enough, so add in being filmed in a situation where you brain is purely focused on not dying with the possibility of some side-boobage, and it’s pretty intimidating. All I can say is, prepare yourself for the worst and then get over it.

When you analyse the video back in the classroom over lunch you will reassuringly notice that underwater video makes pretty much anyone look like they just had a baby, and the coaches are nice. I mean seriously nice. They found something encouraging in every video. For example, I have good balance! Apparently this is a really useful thing! And, this is special! Not everyone finds balance easy. Yay. I ended the first half of the day on a high.

There’s another two-hour pool session in the afternoon and that’s where it really kicks up a notch. You start trying to put it all together – doing drills; three perfect strokes and then actual breathing on top of it.

That’s where I started to fall apart. And I wasn’t the only one. It was at this point that I really really learned the value of proper coaching (a core tenet of the TI programme). Each person got exactly the right support and coaching they needed to keep going. This might sound like a small thing, but having recently read up a lot on top coaching techniques (in books like The Talent Code by Daniel Coyle) this is the difference between having a breakthrough or giving up in a tantrum of frustration.

I didn’t swim perfectly by the end of the day but the head coach pulled me aside as I was leaving and said “You swim great until your head gets involved and you doubt yourself. After you leave here today just get down to the pool and keep practising the techniques. You are a great swimmer. That’s all you need to do.”

Is that Mister Miyagi or what? Anyone who knows me knows that I am a self-critical over-thinky freak. And that is just the bit of advice I needed to keep going.

The Results of my TI course

Well, I did get myself down to the pool and I did practice the techniques. And I sucked. I mean, really sucked. Suddenly I couldn’t even swim as far as I could before the course and I was gulping in water – something I haven’t done since I was about 8 years old.

But I listened to my coach and I told my brain to stay out of it and stop interfering. And then suddenly, my body just started doing stuff on its own. I would say that within 1 – 2 sessions I got in the medium lane and started doing laps. Maybe that’s the level that you’re at today but for me that was a major jump in skill and ability.

But there’s something more than that… I love it.

I have never felt this way about a physical activity before but I cannot keep myself out of the pool. It doesn’t matter how early in the morning or how tired I am in the evening if I can get to the pool for a session I go. And when I get in the pool I easily drill myself up and down lengths for 60 – 90 minutes.

This is the cool thing you learn about swimming. If you are doing it right you don’t get tired so easily, you don’t run out of breath and need to stop at the end of the pool gripping to the sides and gasping for breath. And I’m not just swimming, I’m practising. TI teaching you how to have a good practice.

Terry Laughlin is big on the art of practice. He thinks that good practice, like that with Total Immersion swimming, can achieve Zen like status. And I think he could be right.

Yesterday I started googling ‘open water swimming UK’ because I wanted to start to take my zen-like swimming experience out into the world. I want to swim in lakes, and oceans, and rivers. I want to swim long distances with no end of the lane in sight. I want to swim all of the time. I think I am starting to swim like a fish…

It’s pretty simple; cap, goggles, and stuff that reduces drag in the water – guys that means no ‘parachute pants’. It’s not all bad, one has observed that the alternative to speedos these days are a much more acceptable longer skintight short (hey, us women folk have always had to contend with skin tight suits or, even worse, the bikini).
Every pool I’ve ever been to sells Zoggs so I went for full Zoggs uniform. For those of us battling our bodies they have an amazing Swimshapes range. I bought the 5 star cheap-as-chips Air Fusion goggles; they fit, never need adjusting, and definitely do not fog.