You are here: Home / Life Dorkage / Suck with money? You Need A Budget 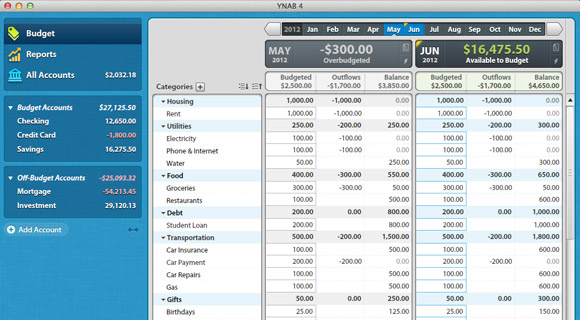 I am terrible with money. Once the bills are paid and I’ve made some essential (not essential at all) purchases, it’s week two of the month and I’m counting down the days until I get paid again.

This was all fine when I only had a small amount of rent to pay and could spend the rest on being irresponsible. But now I have a mortgage, the remains of a wedding debt to pay and troubling thoughts of pensions and saving as I hurtle toward turning 30 next year. It’s time to grow up and get a budget.

When someone on Twitter said to me “You Need A Budget”, I balked. Budget? How terribly dull.  But You Need A Budget is actually a piece of software and an app (apps will always hook me in). It’s based around four rules:

The idea is to budget your money based on your income, put something aside each month for things you can’t plan for (or things like birthdays and Christmas), and to eventually live on last month’s income. The app encourages you to put a little bit aside each month to create a buffer, which you can eventually transfer to become someone who lives on last month’s income.

The software involves some of the classic elements of budgeting, like setting budgets for different sectors of your spending and inputting your spending and income. I particularly like that I can see easily how close I am to overspending in areas such as eating out or clothing. It’s easy to use, and there are lots of handy extras such as graphs breaking down your spending.

I’m into month two of using You Need A Budget at the moment and enjoying a certain amount of clarity and ability to ‘roll with the punches’. Budgeting can be tricky when you’re self-employed and money doesn’t always come in when planned, which is why living on last month’s income is essential. You get a 30 day free trial, and then have to buy the software key online if you want to continue using it. AppSumo (affiliate link) often runs special deals on this. There’s one on at the moment making it $30 rather than $60.