You are here: Home / Featured / What it’s like to have laser eye surgery

When Dork Adore got offered the opportunity to review Optical Express’ laser eye surgery, we sent internet marvel Helen Brown along to have a bit of her eyeball sliced off. Here’s her diary of the experience. 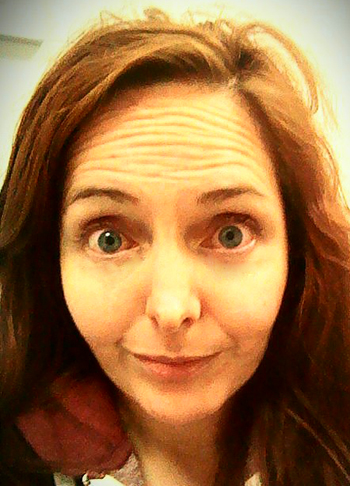 My whole approach to the laser eye surgery appointment was best described as blasé.

I was practically nonchalant about the Wavefront Lasik surgery and instead I was just excited to be able to see again, courtesy of Team 21 from Optical Express.

Everyone I’d spoken with about it knew someone who’d been through it and they were unanimously positive about the ease of the procedure, the speed of the recovery and the life-changing effects.

That reassurance, coupled with the company of my ever-attentive Mam meant I fair skipped into the Optical Express clinic with not so much as a twitch of nerves.

The preparation had extended to a mildly annoying week without contact lenses (they affect the shape of your eye which can compromise the surgery’s effectiveness), no make-up or perfume on the day and a speedy pre-appointment Gregg’s pasty.

Four eye tests and a consultation with the confidence-inspiring surgeon, Dr Qasi, and I was deemed ready to go.

The very friendly surgery team put me in a surgical hat, cleaned my eyes and administered the anaesthetic eye-drops. My cool slipped a little when faced with the realisation of what was actually about to happen to my eyeballs.

The surgery doesn’t involve the scary eye-clamps and massive needles of your nightmares, but there is a lot of use of the word ‘flap‘ in relation to your actual cornea, which is a disconcerting idea.

The procedure starts with a firm pressure around the eye – there’s no pain, just a scattering of multi-coloured pixels while I stare at lights amid metal. They’ve just sliced into my eyeball, though they may as well have been applying eyeliner.

Next, I focus on a flashing red light as Dr Qasi works the tap-tapping laser’s magic for a swift 14 seconds.

‘Keep very still… very still,’ is his firm instruction. I’m almost certain my brain’s going to force my body into a break-dance routine out of impudence but it doesn’t.

A perfectly comfortable disk keeps my eye open from the side and the drops have relaxed the blink mechanism. I remind myself that the smell is simply gas from the lasers and refuse to let the words ‘searing’ or ‘burning’ anywhere near my mind.

All in all it’s as simple and painless as everyone said it would be, but a very sci-fi experience. It’s as though some alien-technology experiment is taking place, except the surgical team are all smiling and acting like it ain’t no thing.

About ten minutes in total and I’m done. The team explain the dos and don’ts for the coming week – there are three different types of drops, beautiful protective goggles for sleeping (pictured below), no exercise and careful hair-washing. 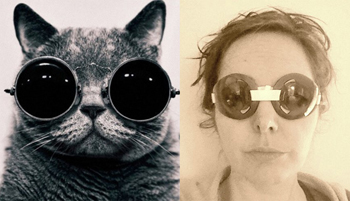 Protective post-surgery goggles and a lookalike

The Dr Qasi spots a rogue fibre trapped in my cornea  in the post-op exam, but I’m immediately re-aneasthetised in the operating room and he removes it with an eyewash in moments.

In the time straight after the surgery, everything’s cloudy as though I’m under water, but I can already see much more clearly than I could without my glasses. Just 90 minutes after I arrived, I’m free to go.

My nearest surgical clinic happened to be an hour’s train ride away from home and, like an idiot, I’d had vague notions of undertaking the journey alone.

However, 15 minutes later as the anaesthetic wore off I found I was unable to keep my eyes open and was glad of my little Mam’s arm. My eyes were heavy, watering and blinded by all kinds of light, despite the sunglasses I’d brought – so there was no chance of reading departure boards.

With some basic painkillers and several hours of patchy sleep, the feeling of having soap in my eyes gradually wore off. At my 24-hour post operative check-up I found I had better than 20/20 vision and – oh my – the joy of sight is intense!

The optician tells me that my healing’s on course and I should expect even more improvements in sharpness and light-glare over the coming weeks. This is the stuff of miracles.

Next time, I’ll describe what’s changed since having the surgery…

Disclosure: Helen got free eye surgery from Optical Express so she could review the procedure. The views in this piece are entirely her own and have not been edited by Optical Express or otherwise interfered with.