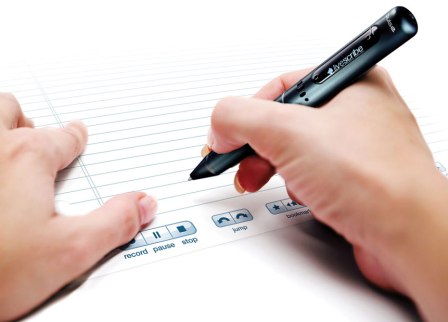 It’s hard to believe that something as simple as a pen and pad of paper could have charmed the nation’s geeks quite so thoroughly. But charmed they are. Vero, over on That Canadian Girl wrote it a love letter, while Shane Richmond at the Telegraph thinks it’s pretty damn spiffy. Even Tom Watson MP has been hankering for one.  It’s always a good sign when people start describing a gadget as using “magic” and that word seems to come up a lot with the Pulse Smartpen.

So just what is it about this pen that’s got everyone quick so excited?

For starters, the Pulse is no ordinary pen. It comes with 2GB of memory, a small screen, a mic and a built-in camera. And it’s the camera that’s responsible for the magic. It reads tiny dots on the special pad, allowing it to transpose whatever you have written into digital format, which can be uploaded to your PC or LiveScribe online account simply by docking the pen in its USB cradle.

The magic doesn’t end there, however. There have been digital notepads before and none have proved particularly compelling. What’s different about the Pulse Pen is that it can also record your meetings, classes and lectures. And, once recorded, you can tap the written notes and listen to the audio recorded at that precise moment. You can also run searches for words, which the LiveScribe software will locate for you, allowing you to play back salient points from your meetings or lectures.

Sometimes it’s easier to show these things than to explain them, so here’s a brief demo of the pad and pen.

Dork Adore Demo
brought to you by Livescribe

Impressive, no? Question is, do you need one? I’d have loved one of these back at university, but for a few quid more you can buy yourself a decent netbook these days, so there’s a chance I might think twice about treating myself to one.

I love the technology behind this gadget. Loved playing with it in meetings and showing off the little extra features to friends, but I still can’t quite work out why I need it.

If you’re keen on Evernote and like the idea of having digitised notebooks, this is exactly the gadget you’re after. If I could come up with a cast iron reason to purchase, I’d buy one in a shot, but until that time, for me this is a very neat toy looking for a purpose.

Let’s hope the upcoming apps and upgrades promised on the LiveScribe site soon convince me that I can’t live without this magic pen.

And eBay has some good deals too.