You are here: Home / Opinion / Why Apple's Ping won't catch on 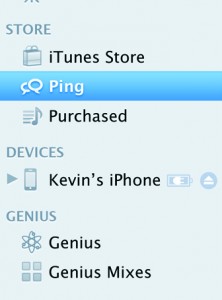 Another end-of-summer evening, another Apple press conference. They have become a way of marking the eternal passage of time and your own undeniable mortality, right morbid gadget fans?

Well, this conference bought the announcement of Ping, which is in no way related to Microsoft’s Bing. Obviously.

And here’s why it won’t work.

It’s all about the music you buy. It’s not the music you add to your library or the stuff you already own that you listen to a lot. Imagine if someone tried to decipher your music taste from the stuff you bought in the past two months. Would they get a fair picture? My picture would look suspiciously origins-of-ska heavy, which I can safely safe doesn’t really fit with my folksy roots. I don’t want to know what my friends have cheap lasix bought — I want to know what hidden gems they’ve got that I’m missing.

Who buys from iTunes? If you’re buying your music from iTunes, stop and go and buy it from Amazon — it’s generally cheaper. Or maybe you still buy CDs. Sorry, ripping them won’t contribute to your Ping profile. Or maybe you just ‘acquire’ your music. Well, obviously your stuff’s not going to be added. Pirate.

iTunes makes you want to get in, do what you need to do, and get out. Syncing never works as smoothly as it does in an Apple press conference, and I only open it under duress when it turns out my iPhone is full. It’s not the place to go and while away the hours. Sorry Steve.

In fact, if you want the stuff Ping promises, there are two places to look.

Spotify is an obvious first – not only can you see what your Facebook friends are listening to, you can see what playlists they’ve made and subscribed to. And because they’re not being asked to part with cold hard cash for each album they add, it’s a much more interesting feed. Perhaps it’s just that I’ve managed to only make friends with tightwads.

The other thing you need is Songbird, which has been billed as an alternative iTunes for a good long while now. It’s long had the ability to scan your entire music library and then suggest local gigs you’d be interested in. Which is a step above having to subscribe to every artist you like in order to get updates, a la Ping.

Don’t get me wrong – there’s plenty of stuff that looks like fun in Ping. But in my humble Apple-loving opinion, I don’t think it delves deep enough into your music collection to offer true value, and I don’t feel warm and fuzzy enough to hang out in iTunes to find myself proved wrong. Or am I wrong?