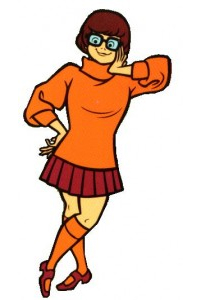 We all know that ‘geek chic’ is terribly fashionable right now, what with the world and his wife sporting oversized glasses and deliberately terrible haircuts. But what about the real geek fashion icons; the ones who are cool because they are so nerdy, and not in an uber fashionable way?

Well, my new feature is about to redress this wrong in society by taking a look at some of the best geek girl fashion icons there are.

How could I start anywhere other than with the coolest of the girl geeks herself, Velma from Scooby Doo? I’m sort of biased because my own look is a little bit Velma — at least the hair and glasses — but she’s definitely one of the originators of the whole geek chic movement.

Huge frames? Mary Janes with knee socks? Ironic knitwear? I think she might have been the original hipster. But she’s more than just a sartorial trend-setter, she’s the brains of the whole Scooby Doo operation and usually the one who figures out the mystery first. Although, as it’s usually a case of unmasking the hotel/fairground/beach resort owner this probably isn’t saying much.

Under the cut I’ve put together some inspiration for a Velma style outfit of your very own..

I’ll admit, orange and red is a difficult colour combo to pull off but if Velma can do it, so can you. Although I wonder at the wisdom of including Gucci frames considering the frequency with which she lost hers.

What about you? Who are your Geek Fashion Icons? Let us know in the comments…