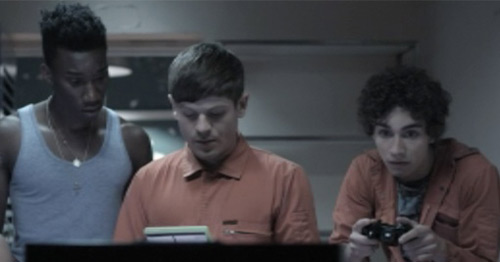 This series of Misfits is flying by, isn’t it? I spend so many TV reviews nowadays talking about incrementally progressing subplots or clinging rigidly to a status quo (yes, I am talking about Merlin), and this show is untroubled by any of this stuff, barrelling forward on a wave of mad ideas and cleverly planned twists.

The beginning of this episode features an epic swerve, as the cast face a plotline that is straight from the standard school of fantasy/sci-fi ideas: The New Guy. This would probably have been good, but I wasn’t sad when it veered off into an insane direction by ten minutes in.

In fact, even by Misfits standards, this episode features some big twists. Having managed to win a BAFTA for that first series, which was pretty nuts at times, writer Howard Overman seems to have decided that the only way to top it is to throw everything at us. And good for him, I love this stuff. The Grand Theft Auto-inspired sections could have easily been preachy or boring, yet they too were brilliant.

The bank-robbing sequence, as well as the meat-hook hanging, were fun as well, but there wasn’t much I didn’t like here. I’m just hanging on how exactly they’ll bring this to an end in a couple of weeks.

And looking back on the series as a whole, I like how things have developed. The way Simon has become more and more of the “leader” of the group, yet remained somewhat invisible, is very well managed; I particularly enjoyed the scene where he dared to step on Nathan’s toes as “the funny one” as well.

I also like where they’ve taken Aisha with this “Superhoodie” storyline, as she’d probably had the least development of all of them. And, once again, very surprised by the twists in that area this week, as I was still expecting him to turn out to be evil.

In short, in a world that features The Walking Dead and Peep Show, both of which are very good, I suspect Misfits may be the best thing currently on television. If you are not watching it, and especially if you’re at all keen on geeky TV, it’s all on the 4 On Demand website and you should check it out. I know this is a big statement, so feel free to tell me I’m wrong below.