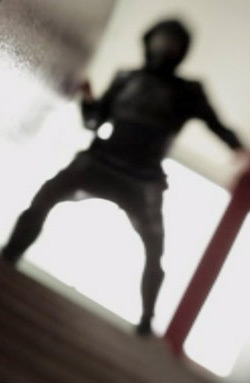 In the formulaic world of British TV drama, Misfits often stands alone, thanks to its unpredictability and sheer bad taste. And this week, it launches itself from the pack again by virtually resolving the big mystery of the year in the third episode.

Maybe I’ve been beaten into submission by shows like Spooks dragging a single plot point out for a whole series, but I hadn’t expected any movement in the “Superhoodie” saga until at least the fifth episode or so. So this week, I was mostly staring at my television in blank shock.

Superhoodie = Batman In A Gas Mask?

Of course, when I say they resolve the mystery, I mean they reveal the identity of the masked man, so I can finally stop typing “Superhoodie”. Said revelation actually throws up a lot more questions; in fact, it’s so incongruous that I wouldn’t be surprised to see him take off his mask next week and be someone else entirely.

But that’s part of the fun. In fact, this has the potential to be a textbook example of a year-long ongoing story, as opposed to other shows who think you have to merely mention whatever it is each week, and nothing need actually happen until the final episode. Bravo, Mr Overman.

Of course, if I were a nasty pessimist, the plot points introduced here do have the potential to throw the series into convoluted Heroes territory, but I am willing to give them the benefit of the doubt until it actually happens. I think they’ve earnt it.

Aside from the man-in-black malarkey, there’s a regular episode plot involving mind-altering tattoos. It’s mostly played for laughs, via Nathan’s terrifying seduction of Simon. It’s good that they’re still not scared to disturb me.

Oh, and the women of my Twitter feed realised that Iwan Rheon (aka Simon) is quite good looking when they aren’t deliberately giving him terrible clothes and hair.  Meanwhile, Curtis’s subplot meandered on, and I enjoyed it for its sheer aimlessness.

But in short, I was excited for this series of Misfits before tonight’s episode, and now I am much more so. (Not excited by the Nathan/Simon scenes, no. They nearly made cringe out of my skin.) But can’t wait to see where it goes next week.