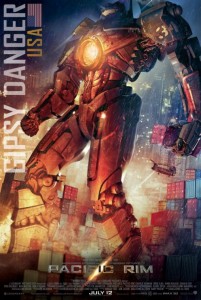 Hollywood’s Summer of Destruction continues. So far, we’ve had Earth come under threat by aliens, middle-class robots and zombies. But in Pacific Rim, it’s the robots that may end up saving our behinds, as Guillermo del Toro unleashes a band of terrifying Kaiju on to the world.

Terror from the deep, indeed… 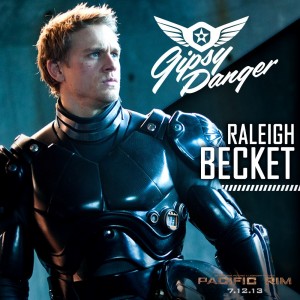 In 2013, humankind comes under attack by terrifying colossal beasts known as Kaijus, who are rising to Earth from a portal on the Pacific Ocean floor. The nations of the Pacific Rim unite and come up with a strategy : to build powerful and equally colossal robots called Jaegers (German for “hunters”) who are each manned by two pilots who’s brains are linked to share the overwhelming toll that piloting a Jaeger takes on a body and mind (a process known as “drifting”).

The Jaegers prove effective, and the pilots are being given hero status. But the Kaiju attacks start to occur more frequently, and by 2025 the government discontinues the Jaeger programme, instead opting to defend the coasts by… well, building a giant wall along them.

Stacker Pentecost (Idris Elba), the Jaeger forces commander, sees this plan for what it is (incredibly ineffective, as you may have guessed) and, as the four remaining Jaegers are redeployed to Hong Kong, he comes up with a plan to end the war.

He approaches former Jaeger ace Raleigh Becket (Charlie Hunnam), with the request to pilot Gypsy Danger, the Jaeger Raleigh and his brother Yancy used to pilot, before Yancy was killed by a Kaiju (while still neurally linked to his brother, which caused Raleigh to be traumatised.)

Raleigh accepts and returns to pilot Gypsy Danger once more, with the help of Mako Mori (Rinko Kikuchi), the director of the Jaeger refurbishment programme and the person with the strongest connection to Raleigh.

As the Kaiju attacks increase, it is up to Raleigh and Mako and other Jaeger pilots to put an end to the apocalypse. 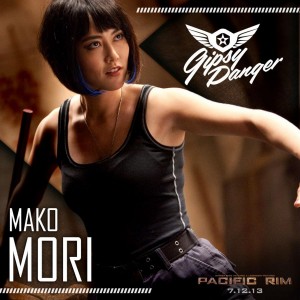 One of the tag lines for Pacific Rim reads “Go Big or Go Extinct”. And my goodness, it’s certainly going Big with a capital B. In the first fifteen minutes alone, you get a sense of just how screwed the Earth is in this situation. The Kaijus start attacking, the Jaegers are being built and Hunnam’s protagonist narrates as the Earth rumbles towards destruction and the Jaegers start losing.

Keep in mind, this is all before the titles have even hit the screen.

It’s a positively exhausting experience, even more so in 3D. That doesn’t take away from the fact that this is obviously a work of love. Guillermo del Toro makes no secret of his love for old-school kaiju and mecha productions like Godzilla and The Beast From 20,000 Fathoms (respective creators Ishirō Honda and Ray Harryhausen get thanked in a post-credits tribute) and his desire to create something “original, but madly in love with its influences” pays of in bucket loads.

Still, there are some flaws. There isn’t much space for character development, and apart from Hunnam’s character (who gets the entire pre-credit sequence dedicated to his backstory), we don’t learn an awful lot about who we’re dealing with. Which is a shame, because I would personally pay good money to see elaboration on Stacker Pentecost.

Despite being testosterone-heavy from the get-go, it is in Rinko Kikuchi that the film finds its heart. Her character Mako is an effortless equal to both Pentecost and Becket, and she is a joy to watch. Kikuchi was also the only actor who didn’t break under the intensive strain of filming in the Jaeger cockpit harnesses (her secret, according to del Toro, was to “think of gummi bears and flowers”).

Pacific Rim crams a lot into its 131 minutes. And somehow, not enough. But still, it is one of the most joyous films of the summer. Even if it is about the possible end of mankind.

You’re a fan of Guillermo del Toro ; You’re waiting for next summer’s Godzilla remake and want to sate your kaiju appetite for the time being; You know… it’s awesome.