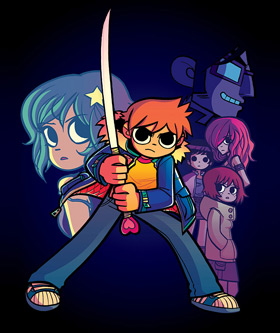 Scott Pilgrim, the Canadian-manga series by Bryan Lee O’Malley, has been the independent comics success story of recent years. From the first volume in 2004, momentum has steadily built until the sixth and last book in the series was released to an eager public last week.

Midnight openings, huge parties and, of course, an upcoming big budget film all sprang up around the final instalment. Thanks to the super-viral trailer for said movie, the premise of Scott Pilgrim is now familiar to many. Boy meets girl, boy gets girl, boy has to fight defeat her seven evil exes to keep girl.

But why should you check out the actual comics, rather than wait for this movie to hand you the whole thing on a CGI plate?

Not that the cinematic version is expected to suck. With Edgar Wright directing and an array of cool actors, it should be a massive fun injection. But although Scott Pilgrim has drawn attention for its surreal Mega Drive combat, it’s still a black and white indie comic. And what do they have? Yes, lots of talking. Really funny, insightful talking.

Not to mention smaller battles en route to the evil ex boss fights. Wright is cramming all seven of those into a single movie, so some of the little incidents are going to get cut. The comic series really is the geek equivalent of Harry Potter, and that includes the scale of the universe, the number of characters who pop in and out, living their own lives slightly off camera. It’d be a shame to miss all that.

Plus, Bryan Lee O’Malley is genuinely a great cartoonist. The first book is solid, but by the last few volumes, he’s completely in his stride, experimenting with his layouts and wringing emotion out of the poor characters. It’s part of the fun to watch his style develop through the series.

Some have described Scott Pilgrim as “the story of a generation”, and it probably is. If you’re a confused twenty-something with vague creative aspirations, vague relationships and a general sense of vagueness, there’s a good chance you’ll take these books to heart. Even if you aren’t in this social group yourself, just knowing and loving them might be enough.

On the other hand, if you think those people should shut up, cut their hair and get a proper job, there’s a chance you may fall outside the target audience. But never mind you. Scott Pilgrim is awesome.