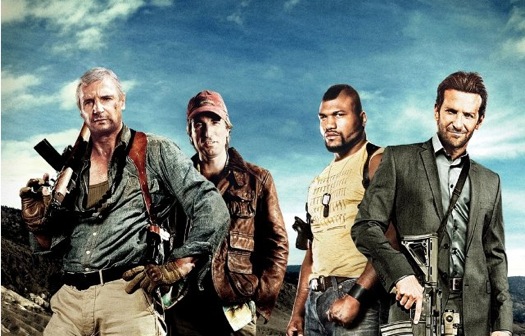 The summer cinema season tends to be chock-full of flashy, mindless showpieces with lots of explosions and a hefty dollop of cheesy white-toothed grins. This summer’s reboot of The A-Team certainly fits the bill.

If you tuned-in to The A-Team on TV back in the ‘80s, you’ll no doubt have fond memories of the four ex-US special forces operatives; Hannibal, the man with the plan, Face, the wisecracking ladies’ man, Murdoch, unbalanced but brilliant, and BA, a big burly black guy with a penchant for bling.

Together they went about carrying out plans to blow up bad guys with brilliant home-made gadgetry. Here’s the Wikipedia entry. Go nuts.

Or, don’t go nuts, just go and see the film where they’ll spell everything out for you very slowly and clearly as though you’re an illiterate three year old who doesn’t speak English.

Too much going on

Telling a story can be a tricky business and, in The A-Team’s case, the filmmakers have tried to cram too much narrative into one film. What with introducing us to all the characters, explaining how the A-Team got together and the whys and wherefores of their subsequent incarceration, by the time we actually get to the bones of the film we’re a bit A-Teamed out.

You’d think somewhere along the line, someone might have piped up “Maybe this is why they kept it as a series, eh guys? Guys?”

Does it live up to the ‘80s series? Well, yes in that the series was also a bit crap and full of border-line offensive stereotypes. But it also lacks that air of innocence, the cut-and-dry bad guys and clever homemade gizmos that made the series so charming.

The casting could have gone oh so horribly wrong. Imagine a generic pretty boy like Zac Efron trying to pull off Face, or wheeling William Shatner out to give Hannibal a self-satisfied stab… I shudder to think. Good news though, they couldn’t afford Zefron so they ended up getting the alpha squad pretty much spot on — I particularly adore seeing Liam Neeson having a bit of fun and loving it when plans come together.

It’s not all good

The only real let down is BA. Let’s face it: Mr T was BA. Simply casting someone who looks a bit like him and stencilling PITY and FOOL onto his knuckles isn’t going to cut it. Quinton ‘Rampage’ Jackson gives it a good go but he seems to know he’s fighting a losing battle, leaving BA little more than the token black guy who (rather awkwardly) calls people ‘fool’ a lot.

And he doesn’t drink any milk! The bling we can live without, but the milk? C’mon! He also has a very token existential faux-religious crisis of faith which, I think, is somehow related to his hairstyle. It’s incredibly tenuous and ridiculous. You’ll see what I mean.

What else didn’t I like? The laughs are feeble, the love interest sub-plot is pointless and unsatisfying and the baddies aren’t really very bad – aside from being quite an inept villain, Patrick Wilson as Agent Lynch reminded us too much of Will Arnett to be taken seriously.

One thing you can’t fault The A-Team on, though, is its liberal use of the if-in-doubt-just-blow-some-stuff-up technique. There’s definitely a spot of Michael Bay channelling going on here, to the point where you’ll lose track of what’s actually going on. Our advice is to just sit back and take the kabooms as they come.

Big on action and bad-boy swagger, The A-Team boils down to harmless Hollywood fun. It’s lost a little something of its charm in this post-millennium world, but you could do worse at the cinema this summer (The Expendables anyone? No?). That said, with the likes of Toy Story 3, Inception and Scott Pilgrim doing the rounds you could definitely do a lot better.

All that and we didn’t even pity any fools at all. Winner.