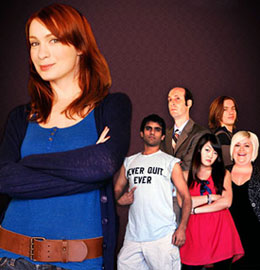 With relatively little dork-friendly television on the conventional airwaves, it makes perfect sense to turn to the internet. After all, it’s The Future. And as luck would have it, hugely successful web television series The Guild has just started its fourth season.

Released online in weekly episodes of less than ten minutes, The Guild follows the comedy-drama antics of a group of thinly disguised World Of Warcraft enthusiasts. They refer to each other chiefly by their in-game names, interact more via internet connection than in person and generally live down to their stereotypes.

But writer/star Felicia Day’s affection for the online role-playing subculture is clear. Even more so than Britain’s very own The IT Crowd, The Guild wants us to root for its nerdish heroes, even though it rightfully pokes fun at them with the same breath.

From indie underdog to well-funded underdog

Originally released with very little backing, The Guild relied on word of mouth and fan donations to get through its first season, only picking up more impressive corporate sponsors later. Even in its fourth year, it maintains a pleasant air of the indie underdog, focusing on its characters and comedy. Although Felicia Day gets a lot of the attention, there’s a fine ensemble cast here, all of whom have been with the series since its humble beginnings.

In true modern fashion, you can watch the whole first three seasons of The Guild on their website, for no money whatsoever, and the new fourth season episodes are also linked from there. The production values and acting are all top-notch, especially considering the finished product is given away for free, and the writing balances elegantly on the towering wall between comedy and drama.

Not to mention, as Day herself seems increasingly in demand for movie and television work, this may be your last chance to say that you followed her when she was doing her little web series.

So, while the summer lull in interesting new television projects persists (until Sherlock starts), you might as well give The Guild a shot. After all, it’s free and only ten minutes long.