You are here: Home / Featured / 3D TV: The Future Of Home Entertainment? 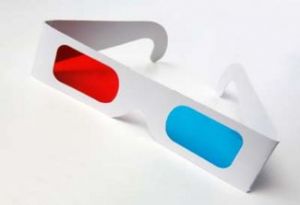 Cinemas have been offering three dimensional viewing for some time now, so it was inevitable that our living rooms would follow suit. After all, with more and more movies filmed for 3D, eventually the DVD buyer starts to feel they’re missing something.

I imagine I’ll own a 3D set one day. So when offered the chance to see a range of demonstrations, it seemed foolish to say no, lest I be left behind in our manic dash for the future.

The basics, obviously, are the same. There is a screen, it shows a blurry picture, and you watch it through the darkening filter of 3D glasses to see fish swimming towards you. And let’s not forget, when it’s well-done, the effect can be amazing.

However, whereas the spectacles in cinemas are cheap plastic that you can throw away afterwards, or keep for beach season, the at-home versions include some of the technology for making the magic happen inside their very bodies.

What do these 3D glasses mean to me?

Firstly, they have to be recharged every so often, like your mobile. Secondly, they are bulkier. If you want to pretend you’re in a sci-fi movie from decades ago, this is the closest thing yet to VR visors; they even extend over your eyes to block out ambient light.

Lastly, the glasses being more than spindly Happy Meal toys means they cost a bit. The price I was quoted was £60 a pair, although this should drop as technology advances and Tesco Value alternatives rush to market.

But for now, having all your friends over for a 3D party will be an expensive exercise. Feel free to link to this post if you’re planning such a bash and want them to know how much you spent.

Do I want to throw a 3D party?

Much of the above is practical inevitability. One genuine annoyance is that 3D glasses often don’t work between different brands of set right now. So if your friend has a Phillips TV and you have a Samsung, getting him to bring his own glasses to your 3D party will not save you £60. You have to assume standardisation is coming, as that’s irritating.

But this shouldn’t become a moan about the need for glasses. Since we’re talking about the glowing technology of the future, I thought I’d finish on a shiny note. Apparently some 3D sets don’t just play movies already in 3D, they can also make existing 2D pictures pop out. Live football games, old movies and even Teenage Mutant Hero Turtles cartoons might be springing to life. Isn’t that exciting?

No, the quality won’t be as good as full professional 3D conversions, but again, this should improve as technology advances. I think we’re still in an embryonic stage with this, personally. Not for me, the teething, vomiting and expense of early adoption. But in a year or three, I genuinely believe this could be quite cool.