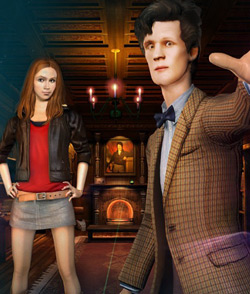 Nearly two months after Doctor Who disappeared from TV until Christmas, a new Adventure Game appears! With no other Who product of late, at least until Sarah Jane Adventures starts back up in autumn, this prospect excited me a little. The last two were decent, after all, and it’s always pleasant to hear Matt Smith and Karen Gillan in character.

Unfortunately, this one simply isn’t very good. Sorry. I try to focus on the good points, I’ll mention a few later, but TARDIS was small, boring and, the cardinal sin for a Doctor Who story, lacked any real imagination.

The Doctor should not kill time

It feels a tad wrong to apply these terms to video games, but it felt like a time-killing exercise, or one of those episodes of the TV series which uses the bare minimum of sets and thespians to save money. But I thought the point of the video games was the limitless budget? I suppose creating all those pesky virtual environments still takes some coins.

But the adventure-within-the-TARDIS idea could still have worked, if the gameplay wasn’t so empty. There are two rooms in this whole episode. Most of the “puzzles” can only be solved by strolling around hopefully, until a blue glow signifies you can click now. The mini-games are all re-used from previous episodes.

There is a “new alien”, but it’s a floating blob with a voiceover. The final challenge is difficult, but not because it’s complex; rather, because the controls are too imprecise to make the necessary moves in the time limit, even when you know exactly what to do. This leads not to a sense of challenge, but desk-pounding frustration.

It’s not entirely without merit, I suppose I should say. The presentation is quite nice, especially considering its free, there are some nice moments of dialogue and having Smith and Gillan as Amy and the Doctor does give a nice ring of authenticity.

But ultimately, those things were also true of the previous two Adventure Game episodes, and they were much better. TARDIS is one for the completists, or those with Doctor Who withdrawal so bad that the shakes have started.

More Doctor Who on Dork Adore | Doctor Who Adventure Games: Blood of the Cybermen review