You are here: Home / Gadgetry / Doctor Who Adventure Games: Blood Of The Cybermen review 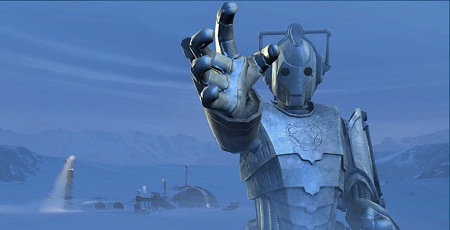 It feels like the BBC have read the reviews of their maiden voyage in the field of Doctor Who Adventures Games. Many of them, including our own, said that it was a good outing, nice presentation, but an over-emphasis on stealth and sneaking.

I’m not arrogant enough to believe our mewling was taken into account whilst making the next chapter, mainly because they’ve surely not had sufficient lead time, but I have noticed their promotional chatter for the new one, Blood Of The Cybermen, insisting that it will feature more variety in gameplay, rather than more constant hugging of the wall.

And, to give them their credit, they weren’t lying.

The new one features very different environments, timed platform jumping and a new mini-game, which became so complicated that I had to resort to counting on my fingers. There’s also chances to take out enemies in a more aggressive manner, which is cathartic after all the cowering last time.

The stealth aspects make a return towards the end, but not for long. However, it does include a sneak-past so difficult that I could not complete it properly. I tried many, many times, and only made it past when the game glitched on me. I should have insisted on going back and doing it properly in the name of fair play, but I could feel both my mouse and my will to live wearing down.

The superficial elements are, once again, pleasingly authentic. The plot twist towards the end is predictable even by Doctor Who standards, but the experience does emulate the series impressively, right down to the stupidly named ‘Cybermats’. (Like a doormat, only deadlier.) A few of the quips between the Doctor and Amy elicit a chuckle, and the Cyberman have been used quite sparingly in recent years, so this felt a bit fresher than last time’s Dalek-fest.

It’s fairly brief, as before; I zapped through the whole thing in less than two hours, but I think each of these episodes should be taken as a level of a larger whole rather than a game in its own right, and they’re still free after all.

There are relatively few challenging sections, aside from the one that seems literally impossible, but they probably shouldn’t make their audience of children cry. And with the 2010 series concluded, the next two Adventure Games might be the closest we get to new Who for a while.