You are here: Home / Featured / Doctor Who: The Big Bang review 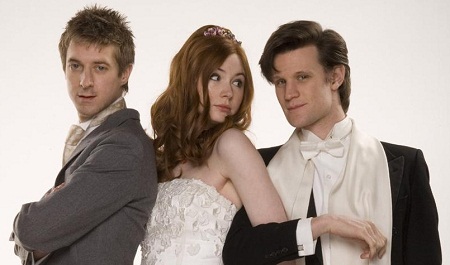 After blowing up the TARDIS and destroying the entire universe last week, the scene was set for one of those “Oh my God big stuff happens!” finales that Doctor Who has often presented in recent years. Oh, and Amy’s dead, and the man himself is locked inside an inescapable Rubik’s Cube.

So it’s surprising that we don’t really get an upscale uber-climax. Important things happen, but massive sweeping special effects shots are conspicuous by their absence. Whether this is a story decision or budget cuts in action, the universe itself restarting feels like an aside to Doctor-Amy-Rory-River Song action and clever time tricks.

Since Doctor Who often only hints at head-knotting back-and-forth stuff, to have it at the centre of the story makes it seem… well, cooler. Helped by the amazing sight of the Doctor zapping about in a fez like a demented genie, until the red thing goes the way of Rory’s ponytail in Amy’s Choice.

Speaking of His Gormlessness, he’s back! Which makes his apparent non-return last week a triple bluff. Ending with the wedding was as inevitable as the Daleks appearing every year, but it feels like they earned it. Not to mention, it’s gratifying to see the regular bloke get the girl, instead of deciding he could never compete with the Time Lord and his massive hair. (Poor Mickey.)

I’ve stopped complimenting the regulars’ acting in the last few episodes, simply because it felt samey, but since it’s the last one: Messrs. Smith, Gillan and Darvill are still doing good work. Considering how recently we’ve met them, it’s a testament to both their performances and the writing that the characters feel like familiar, real people. Well, maybe “real people” is the wrong term for the Doctor, but still.

Another departure from previous finales is the failure to tie everything up in a neat bow. I mused last week about who is exploding the TARDIS to bring about “silence”, and we still don’t know. River Song remains a puzzle, wrapped in an enigma, cloaked in a mystery, wearing heels. Mr Moffat clearly has a long-term plan and that’s comforting, even if it makes this particular episode less of a full stop than it might’ve been.

But when my biggest complaint about the finale is that it made me want to watch the next series, I think it’s done well. If you were enraged by past Who climaxes pulling resolutions out of nowhere, that isn’t absent here – River Song in particular explains a few chunks of plot away through mass of long words.

But thanks to Moffat and company’s build of the fairytale theme throughout the series, it makes the magical ending seem fitting. And honestly, I thought this episode was a fantastic ending to a largely high-quality series. A lovely sense of fun, rather than constant grinding drama, and enough of an ending to keep me happy. Not to mention the fez.