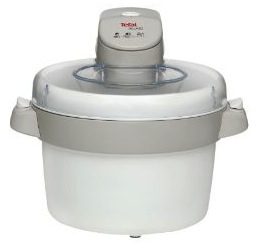 Up until a few weeks ago I had no experience of ice cream makers. I’d even go as far as saying was a little sceptical of their abilities. No-one I knew had one or had used one. I was a virgin ice-creamer.

But now, it’s pretty safe to say that since getting the Tefal Gelato, I’ve gone ice cream mad. That’s how good this machine is.

I say machine, but what it really is is a very cold bowl with a mixer attachment. You need freezer space to permanently store the bowl (a big bag of peas fits inside perfectly, btw). Once it’s at optimum temperature, you attach the mixer, throw in your ice cream ingredients, and away you go.

And the quality of ice cream? Utterly fabulous. It comes with a recipe booklet, which contains the most brilliant cheesecake ice cream recipe, among others, as well as tips for sorbets and frozen yoghurts. But of course, the fun comes with making your own flavours. Following some of Heston Blumenthal’s basic ice cream rules from his Heston at Home book, I’ve gone a bit fancy flavour crazy.

I’ve experimented at creating raspberry ripple, mint choc chip, chocolate orange, as well as a strawberry version of the cheesecake recipe in the book.

One thing Heston recommends is that you take your ice cream out of the machine and give it a whiz with an electric whisk half way through. This should remove any ice crystals, leaving you with super-smooth ice cream every time. However, I didn’t notice any difference when I whisked or didn’t whisk – the machine already mixed crystal-free gelato.

I’m totally sold on this piece of kit. And at £49.99, it’s a cheap and effective way of making great puddings. It’s also nice and easy to wash, making it feel like a hassle-free way to whip up an impressive pudding while your friends look on in admiration.

An additional bonus is that the ice cream tastes much better fresh out of the machine, with an extra hour or so freezing time in the freezer. After that, it can go a bit harder than shop-bought tubs, giving you the perfect excuse to devour it all as soon as possible.

I estimate that for about a litre of ice cream (depending on what sort of stuff you’re chucking in) you average £3 a go. Compare that to the price of a pot of Haagen Daas or Ben & Jerry’s and you’re doing pretty well. Plus, it’s far fresher and tastier than those expensive shop-bought pots.

If any of you want me to upload a recipe for one of the flavours above, ask in the comments below!