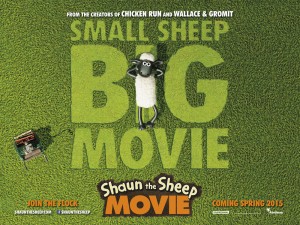 It’s at times like this that you begun to suspect maybe there *is* a benevolent god looking out for us all, after all.

This one is from Odeon, the God of Tired Parents.

Shaun the Sheep’s first ever movie will be released in cinemas worldwide from spring 2015!

When Shaun decides to take the day off and have some fun, he gets a little more action than he baa-rgained for! Shaun’s mischief accidentally causes the Farmer to be taken away from the farm, so it’s up to Shaun and the flock to travel to the Big City to rescue him. Will Shaun find the Farmer in the strange and unfamiliar world of the City before he’s lost forever?

As far as I’m concerned, the more films like this I am obliged to take my daughter to, the better. You know it’s going to be a good one when you’re actually arguing with your husband over who has to take them. Al took her to the LEGO movie while I had to sit through the latest Tinker Bell  (Tinker Bell and the Pirate Fairy, two stars from Tinker Bell aficionado Mark Kermode who tells us that this follows on from the “equally disappointing Secret of the Wings.” Clearly Mark isn’t going to be adding the Tinker Bell boxset to the shelf next to his special edition Citizen Kane and We Need to Talk about Kevin blu-rays).

Only a WHOLE YEAR to wait! Hurray! (Maybe I won’t mention it to my daughter just yet).