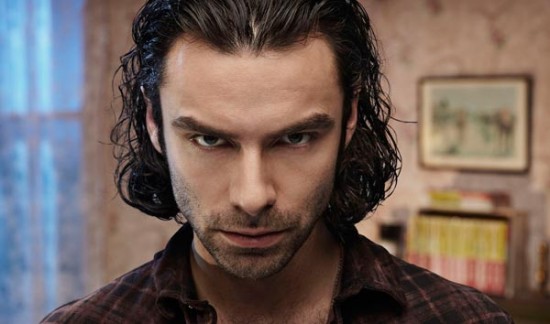 I’ll admit that I failed to watch last week’s episode of Being Human. Life, and my recent addiction to BBC4’s The Killing, took precedence. Big mistake. Tuning in on Sunday evening I was caught in a traffic jam of surprises: Mitchell was in the clink, Nina was as good as dead and Herrick was back in his yellow tabard, protecting and serving as if no time had passed since his sinister days in the Avon and Somerset Constabulary.

What on earth was going on? In order to make sense of this, I had no option but to postpone my bedtime and watch both episodes back to back, a double bill which resulted in my Year 8 class being greeted this morning by an even more befuddled music teacher than usual, blearily struggling to remember the words to Hava Nagila.

Now that we’re all up to speed, I should probably pick over the events of The Wolf-Shaped Bullet. In more or less chronological order: Herrick broke Mitchell out of jail; Nina quickly recovered and Annie disappeared into purgatory, summoned by a singing cadaver. It would have been bad form to relocate Being Human to Wales without somebody spontaneously breaking into song.

From there she watched helplessly as George and Mitchell were imprisoned by Herrick inside the familiar ‘dogfighting’ cage, making its third appearance this series. You would have thought that werewolves might have learnt to carry wire cutters around with them by now.

In an Anakin Skywalker-like rite of passage to the dark side, Mitchell was then instructed to kill George, except that this time, instead of using light sabres, they were using a blunt chair leg. Perhaps supernaturals should carry some kind of whittling tool as well. However, in the nick of time they were sprung by Tom, McNair’s son, who upon realising that he was only a minor character, suddenly vanished.

More happened: Mitchell murdered Herrick, Annie discovered that the ‘wolf-shaped bullet’ was a load of bunk, a chap called Wyndham backlogged the civil courts with employment tribunals by sacking the entire South Wales police force, and George, inevitably, did the decent thing and impaled Mitchell on a much sharper looking stick, but not before sobbing, ‘I’m doing this because I love you!’

Typical of George to act bravely in such a feeble manner.

Although boasting some compelling stand offs, this season finale delivered few bombshells, and little tension – the miserable Mitchell’s tortured number has been up for a considerable length of time.

Furthermore, throughout the series, whilst Mitchell has been furiously composing his own epitaph, it’s been patently obvious that nothing untoward would happen to our other three protagonists, much as the producers wanted us to fear for their safety. Annie, for starters, is already dead; Nina is pregnant and unlikely to be killed off (post Ronnie Branning, the BBC will be staying off infant death for a while), and George has been sidelined so efficiently in recent weeks that nobody would notice that he wasn’t there.

However, signs of life were evident in George’s parting shot to the creepy Wyndham – ‘I think you’ve got quite a fight on your hands.’ he admonished. Let’s hope he keeps his word.