You are here: Home / Featured / Doctor Who – Cold Blood review 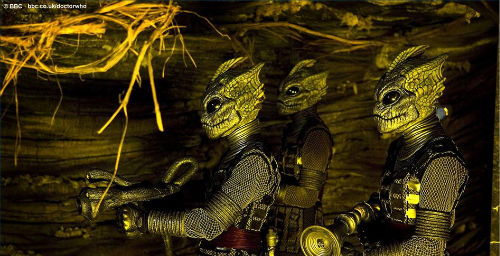 So, this week’s Doctor Who was certainly a game-changer. The ongoing crack-in-time storyline took another step forward, and something horrible happened to a regular cast member, all of which I’ll be elaborating upon later. (So stop reading this and go watch the episode if you’re one of the “NO SPOILERS!” people.)

But although most internet discussion will centre upon those final minutes, it seems rude not to talk about the rest; they constructed a whole Silurian city set and everything. So, the Doctor tries to improve human-alien relations and it goes about as well as usual.

The execution is typically good, but there’s a hanging sense of inevitability throughout. The best parts are the ones which aren’t predictable, such as the final decision by Meera Syal’s character. At times, to be honest, the bigots on both sides act ridiculously hateful and irrational in order to drive the plot in the needed directions.

Considering how much we’ve seen this Doctor’s temper this year, I think he should have shouted at them more, or at least made that woman justify her ridiculous decision to kill everybody with a massive drill.

On the up side, typically good performances from Smith, Gillan and Darvill, and Meera Syal is also great. When relatively famous actors appear in Doctor Who, they often ham it up to the point of bacon, but she’s chosen to rein that in and is all the more likeable for it.

But I was hoping for something more explosive and unpredictable, considering there was a whole episode of build-up last week. Once again, it feels very Who-by-numbers — not exactly bad, but largely unremarkable.

Except for the closing scenes, of course, which I’m going to talk about down here because their connection to the rest is tenuous at best. There’s a big hint about those pesky cracks in time, which only serves to heighten my excitement for the worryingly-imminent series finale. No pressure, Mr Moffat, but I’m expecting genius.

Lastly, poor Rory is no longer with us. Of course, the involvement of afore-mentioned pesky cracks means they may still undo it later. Still, I shed a small manly tear for his passing, because I’ve grown fond of his bumbling normality. It would’ve been nice if he’d had more heroic moments in his final week.

Plus I almost-kinda-sorta predicted it last week, which gives me a small happy. Is Rory the most major character they’ve killed since the new series began? The only competitors I can think of are Kylie Minogue and, um, the Face Of Boe.