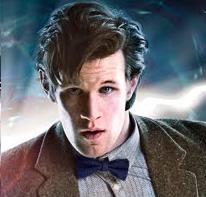 Never mind the switch of government that we’re facing; the only British regime change that counts in 2010 finally happened on Saturday night: Matt Smith took over as the Doctor in “The Eleventh Hour”.

Alongside new head writer Steven Moffat and companion Karen Gillan, he crash-lands gloriously on our screens. Jabbering so much that it makes Tennant seem taciturn, Matt Smith proves compelling; more strange and alien yet equally assured and heroic.

Previous post-regeneration episodes have kept the new Doctor at a relative distance and let us view him through the eyes of the companion, but here the Time Lord is virtually omni-present. Moffat even throws in some intriguing sequences where the high-speed thought processes of the Doctor play out on-screen.

Gillan, meanwhile, still gets to ask leading questions and take the Doctor (and the camera) to task with her defiant stare. However, she’s kept at a distance, with hints about potential secrets scattered throughout. It’s an odd feeling to reach the end of the episode and realise that the new companion might be a bigger mystery than the Doctor himself.

She is also called “Amy Pond”, a character name so good that it too might be a plot point.

The story itself is comparatively lightweight, but that’s fine for this first outing. There are sufficient complications to stop it seeming a walkover, and the new Doctor gets to show off his new personality throughout, especially in the final act.

Especially since this hour has to establish both the man himself and his new companion, it wasn’t the time for one of Moffat’s knotty time travel paradoxes. “The Eleventh Hour” was a cleaner, more watchable experience than “Rose”, the episode that had the comparable task of introducing both the Ninth Doctor and Rose Tyler.

If I had to complain, I’m not yet enamoured of the new theme music or title graphics. There were also times when the monster effects looked a bit ropey and the incidental music over-powered the dialogue rather. (Although those last points are nothing new.) But there was so much to like here, especially in terms of sheer fun, that these niggles couldn’t ruin it. A great return.

Existing fans will probably be delighted, as well as those who had grown weary towards the end of Tennant and Davies’ run. The wheel has not been reinvented, but it’s definitely been given an attractive makeover. Those who thought the last five years of Doctor Who have been childish pish still won’t like it, but they can watch Torchwood instead; I hear that’s for adults.