You are here: Home / Featured / Dork Review: Kick-Ass (The Movie) 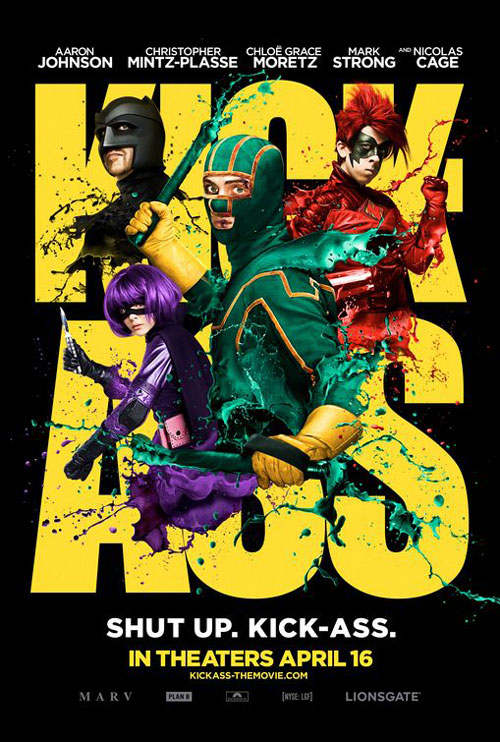 When sitting down to write a review of the movie Kick-Ass, I labour in the shadow of a mighty forerunner. I speak, of course, of the Daily Mail review from last Friday. In terms of sheer entertainment value, there’s no way I can compete with a review that leads off with “Verdict: Evil”.

Especially when, in all honesty, I rather enjoyed it. If that makes me evil, never mind. I’ve been called worse.

Of course, the character that gets the Mail’s goat is Chloe Grace Moretz’s Hit-Girl, an eleven year old girl who kills, swears and steals the show adorably.

Our intended hero is the comparatively useless Kick-Ass, inept-nerd-turned-inept-superhero played by Aaron Johnson. He could easily have become annoying, but Johnson skirts this pothole, letting him make up in determination what he lacks in every other area.

The actual story of Kick-Ass is a violent older brother to the first Spider-Man film, with a shift of emphasis from crying to punching.

Consequently, some of the necessary development scenes featuring the hero and his classmates seem a little dull. The similar intermissions with Hit-Girl and her father, played with unexpected OTT indulgence by Nicholas Cage, are a lot more fun. You might walk away wishing there had been more of them.

All told, this is a swirl of superheroic violence, interspersed with just enough emotion to make us care. But the fighting is so entertaining and the performances so endearing that it works beautifully. But although I may mock that Daily Mail review, they could be right about the film being cynical. Any uplifting message is a mere addendum to the punching and shooting.

After reviewing the original Kick-Ass comic recently, though, the cynicism could be a lot worse. I don’t want to spoil any of the differences for you, as that’s half the fun of these adaptations, but surgery has been performed on a few characters to make them more sympathetic. And, oddly, the scale of the bloodshed has been increased for the movie, even if the comic was more drenched in gore.

But unlike Wanted, the last big screen appearance of a Mark Millar graphic novel, the comic and film are definitely the same story despite the changes. Director Matthew Vaughn, screenwriter Jane Goldman et al have nailed the balance between faithfulness to the source and necessary change, and the result is an exhilarating, if not philosophically enlightening, two hours of brightly coloured action. And, let’s be honest, very little genuine evil.